Home » Likhit Dhiravegin Interview - Part 2: On the orchestration of a political vacuum

Likhit Dhiravegin Interview - Part 2: On the orchestration of a political vacuum

Submitted on Sun, 11 May 2014 - 12:40 PM
Kaewmala
On May 7, 2014, the Constitutional Court ousted caretaker PM Yingluck Shinawatra from office for abusing her power in transferring the former national security chief Mr. Thawil Pliensri.
The Court said in its unanimous 9-0 ruling that the transfer was “unconstitutional,” that although Ms. Yingluck had the power to transfer an official the Thawil transfer benefited her family (the new national security chief appointed by Ms. Yingluck government is a brother of her brother’s ex-wife – see more details). The Court did not only remove Ms. Yingluck from office but also 9 other ministers who were members of the Cabinet at the time of the transfer was made.
The Court reasoned that there was no evidence of Mr. Thawil being ineffective, and that “transferring government officials must be done in accordance with moral principle… Transferring with a hidden agenda is not acceptable.” (Associated Press)
The ruling was widely expected but has been criticized by legal experts as disproportionate. International media reports on the verdict also include some very strong words (see especially the Wall Street Journal editorial).
Although the ruling was a big blow to Ms. Yingluck and her caretaker government, it was not the worst possible as feared, that the PM and the entire caretaker cabinet would be removed to create a “political vacuum” to make way for an appointed PM and interim government the oppositions have been demanding.
Steps are certainly being made in that direction, though not as quickly as the anti-government protesters would have liked. Just one day after the Constitutional Court ruling was issued, the National Anti-Corruption Commission (NACC) unanimously decided to indict Ms. Yingluck for dereliction of duty in overseeing the rice pledging scheme. The NACC will forward the case to the Senate for impeachment. If impeached by a three-fifths majority, Ms. Yingluck would be barred from politics for five years.
The NACC, which admitted it had no clear evidence that Ms. Yingluck took part in or allowed corruption, found her guilty because she “did not govern the country as announced in Parliament.” (The New York Times)
The latest actions by the Constitutional Court and the NACC have further strengthened a view that Thailand is becoming a juristocracy. Many commentators use the word “judicial coup.” The Wall Street Journal editorial is particularly hard-hitting: “The situation would be laughable if it weren’t so dangerous. The conflict has emboldened extremists on both sides who threaten to start a civil war.”
There are real concerns that violence may break out if the entire elected government is once again removed and an appointed government installed. Moreover, whether a new election tentatively set for July 20 will happen is now looking uncertain yet again. Even the Election Commission is now saying it “may postpone” the election, as well as the new Senate Speaker.
The opposition Democrat Party leader Mr. Abhisit Vejjajiva has proposed a 6-month delay for the election and his party threatened to boycott yet another election if his proposal is rejected—which it has been, resoundingly by all sides. Even Mr. Suthep and the PDRC have flatly rejected it because it involves an election. They are still set to have an appointed PM from Article 7 of the Constitution and an appointed “people’s council” to carry out their “reform before elections.”
Mr. Suthep has reset the “final battle” from May 14 to May 9, the D-Day for his “all-out final battle.” He and the People’s Democratic Reform Committee (PDRC) are now once again on the street occupying government offices, including Government House and the Parliament, and TV stations and blocking Bangkok streets. They said they would need the Parliament for setting up the “people’s council.”
Mr. Suthep has called the Pheu Thai caretaker government “a headless ghost” and rejects its authority. Key people in the PDRC are now saying that the new caretaker PM Mr. Niwatthamrong Boonsonpaisan has “no authority” to talk with the Election Commission on organizing elections and as an acting caretaker PM he is not authorized to countersign the royal decree for the July 20 election.
Mr. Somchai Srisuthiyakorn, the EC commissioner responsible for organizing elections, is echoing the PDRC question whether the new caretaker PM has the authority to countersign the royal decree. (On the other hand, Mr. Suthep, who holds no political office and has been charged with murder and insurrection among other crimes, has declared that he would assume sovereign power and countersign a royal decree to appoint a new PM and a government.)
Part 2 continues with the interview with Prof Likhit Dhiravegin by Ms. Jomquan of Kom Chad Luek TV from early April, in which they discussed “political vacuum” and “political machinations” in the ongoing Thai political crisis involving Mr. Suthep and the PDRC and the Constitutional Court. (Part 1 discussed Mr. Suthep’s announced intention to seize “sovereign power”.)
Professor Likhit Dhiravegin is a well-known senior political scientist and Royal Institute fellow. He had a brief stint as a politician as a political party leader for a year during 2006-2007.
source 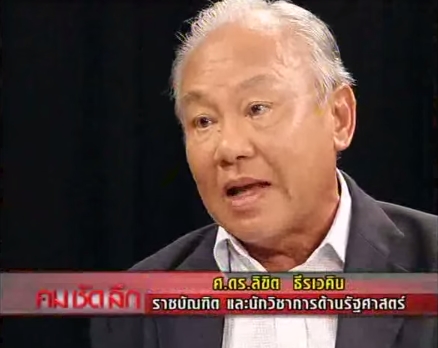