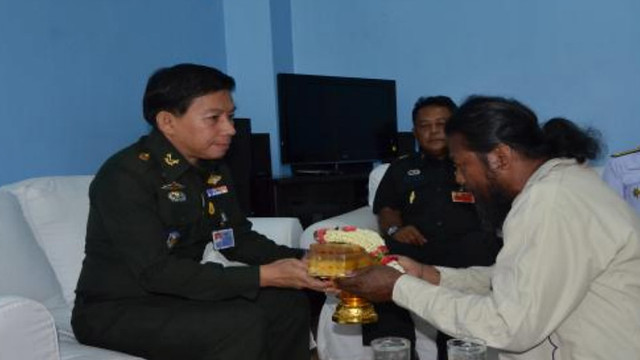 The Royal Thai Armed Forces Headquarters (RTARF HQ) handout photo taken on April 25, 2014 shows a guard leader for the Buddha Issara PDRC faction presents a garland to a representative of the army headquarter (RTARF HQ) to apologize for the attack on a military personnel on April 24, 2014 at Chaeng Wattana Road. (Source: RTARF HQ)

According to a report in Prachatai, after working at the RTARF HQ last Thursday night (April 24), Col Witthawat, who serves as Deputy Director of the International Relations Division under the Directorate of Joint Intelligence, was driving to his home in the Muang Thong Thani area when he stopped his car and tried to remove out of his way a traffic cone erected by the PDRC. He was then shot and assaulted by PDRC guards.

After the PDRC guards found that he was in the military, Col Witthawat then was sent to Mongkutwattana General Hospital with shrapnel wounds in his ankles and facial bruising.

According to the RTARF HQ press release, following a series of 40 mm grenade and gunfire attacks at the Administrative Court offices near the rally site, security around the area had been beefed up. The PDRC security guards mistook Col Witthawat for one of the assailants. The PDRC leaders at Chaeng Wattana Road felt very sorry about what happened and accepted their mistake. They promised that they would not let it happen again.

Meanwhile, Col Witthawat acknowledged this apology by the PDRC faction leaders and felt satisfied. He would let the case pass to legal proceedings.

According to the National News Bureau of Thailand (NNT), the PDRC leader at Chaeng Wattana Road, Buddha Issara, has personally apologized for their action and said the five guards who allegedly attacked a military officer last week will surrender themselves to police.

Police had told the PDRC faction leader that they would charge up to 10 guards with attempted murder.

“Man of the State” fails, next is Abhisit's turn at mediation 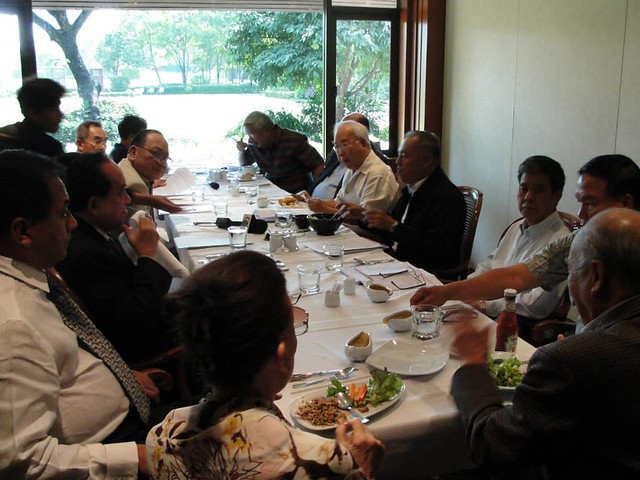 The first "Rattha Bukkhon" or "Man of the State" meeting on January 28, 2014. Gen Saiyud Kerdphol has his back turned on the right of this photo (source: File/SIU)

Gen Saiyud Kerdphol, 92-year-old leader of a group calling themselves "Rattha Bukkhon" or "Man of the State", has failed to persuade Gen Prem Tinsulanonda, President of the Privy Council of Thailand, to act as a “middle man” in solving the political crisis.

After meeting for about an hour at Prem’s Sisao Theves residence last Friday (April 25), Gen Saiyud claimed that Gen Prem had accepted his group's plan to draft a royal petition and would appeal to the HM King to issue a royal decree to solve the political crisis.

Later, on Sunday (April 27), Lt-General Pitsanu Phutthawong, Chief of the Office of the General Prem Tinsulanonda Statesman Foundation, insisted that Gen Prem had only listened to the proposal but had not accepted it, according to a Facebook post by the Bangkok Post military affairs reporter, Wassana Nanuam.

In an interview on Monday (April 30) for the Thai-language newspaper Dailynews, Gen Saiyud, who was Supreme Commander of the Royal Thai Armed Forces from 1981 to 1983 and now serves as chair of the People's Network for Elections (P-Net), expressed his discontent with Gen Prem, saying "In the first place, Gen Prem called asking to meet me, but then later he had his aide call me. I think I deserve some respect. I met him without making a fuss. It was Gen Prem who invited me to a discussion."

According to Bangkok Pundit, the “Man of the State” group was formed in late January, consisting of former military officers and a group of lawyers who met at the Polo Club. Apart from Gen Saiyud, other members of the group are former Army Commander-in-Chief Gen Wimol Wongwanich, former Air Force chief ACM Kan Pimanthip, pro-PAD political scientist and drafter of the 1974 Constitution Pramote Nakornthab, political scientist and former Constitutional Court Judge Chai-Anan Samudavanija and former Secretary-General of the Prime Minister’s office under Surayud Chulanont, Suraphong Chainam. 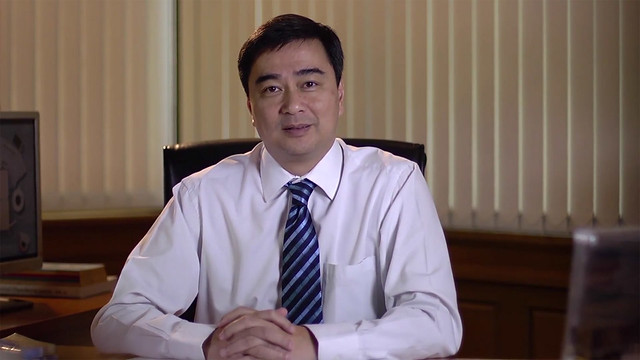 Abhisit Vejjajiva addresses his so-called “solution for the country” via YouTube on April 24, 2014 (Source: Screengrab/YouTube)

Meanwhile last Thursday (April 24), Democrat Party leader Abhisit Vejjajiva, an absentee at the April 22 meeting between the Election Committee (EC) and representatives of political parties to set up new elections, tried on a new role as mediator to find his so-called “solution”.

"It is not a time for dispute or blaming each other anymore. We, including the Democrat Party and myself, are all responsible for bringing the country to this point," Abhisit remarked.

In his 3-minute address released via YouTube, Abhisit said an election without consideration of public order and the showdown by protesters was not the answer for the country.

“I don't believe that the answer will come from a ruling by the court, because the court cannot tell us how the country will move forward in a manner that all sides will accept.” Abhisit said. “And I don’t believe that any revolution or any coup, by anyone, will bring peace back to the country.”

“The only way forward for the country is reform, undertaken constitutionally and democratically. And an election which is accepted by all sides is an integral part of this reform process.” Abhisit said on the YouTube clip.

Abhisit was scheduled to meet with Kittipong Kittayarak, Permanent Secretary of the Ministry of Justice, on April 24, Gen Tanasak Patimapragorn, Supreme Commander of the Royal Thai Armed Forces, on April 28, and the Election Commissioners on April 29. He would also hold discussions with the government, political parties and various protest leaders.

However, the leader of the People's Democratic Reform Committee (PDRC) Suthep Thaugsuban disagreed with Abhisit's plan. Suthep said “Whoever, don't appoint yourself as a middle man. No matter if I know them, have worked with them or I'm close to them. Please don't meddle.”

Speaking to supporters at Thai Airways International's head office last Friday (April 25), Suthep also added that “Mr.Suthep” who was in politics for 36 years wasn't here anymore. Nowadays he was known as “Kamnan," (subdistrict headman) who only belonged to the people.

“I don't listen to anyone but the people. And the people want reform before elections, so we have to topple the government and reform the country by the hands of the people.” said Suthep.

In response to Abhisit’s ongoing attempt, Prime Minister Yingluck Shinawatra said on Monday (April 28) that it was a very good start that the Democrat Party leader was willing to help settle political differences through talks and negotiations. She has also called for all political sides to give him moral support.

Yingluck also suggested that Abhisit first talk to Suthep Thaugsuban, leader of the PDRC before engaging in talks with the government and other parties. She added that Suthep was the one who initiated the reform idea and Abhisit was suitable for this task. She hoped the two could reach an agreement.

Yingluck also said she was also glad to hear that Mr. Abhisit didn't support the idea of coup, but instead proposed a road map for national reform which included an election.

On Tuesday (April 29) the Democrat Party leader demanded that the caretaker government delay the announcement of a new election date, arguing that without reform of the election mechanism for a fair, smooth and peaceful election, a quick poll would worsen the political conflict.

However, EC Secretary Puchong Nutrawong said on Wednesday (April 30) that the EC and the Prime Minister reached an agreement to conduct the new polls on 20 July.

According to the National News Bureau of Thailand (NTT), the government was asked by the EC to guarantee a fair and transparent election process, employ adequate support from the security agencies and maintain absolute neutrality. The EC also called for the right to reschedule voting, whether partially or entirely, whenever it saw that the poll was likely to be unfair or disorderly. Meanwhile, the government would have to accept the fact that, even though the ballots could be cast, parliament session might not necessarily be called within the 30-day timeframe.