Home » ‘Aum Neko’ to be summoned on lèse majesté charge

‘Aum Neko’ to be summoned on lèse majesté charge

Submitted on Fri, 21 Mar 2014 - 11:36 PM
Suluck Lamubol
Aum Neko, a transgender student at Thammasat University who last year stirred a debate about compulsory student uniforms, is to be summoned next week by the police over a lèse majesté charge.
In September 2013, Porntipa Supattanukul a TV host from 13 Siam Thai Channel, filed a complaint again Aum, or Saran Chuichai, for giving an interview on her show mentioning the role of the monarchy in Thai politics. Porntipa never aired the interview she conducted at Thammasat University, but instead used it as evidence against Aum.
The Technology Crime Suppression Division found the complaints to be substantial, and is to issue the first summons on March 24 against Aum, a third-year Liberal Arts student who majors in German. Aum said however she might postpone answering the summons as she was not yet ready.
She said she would fight the case as she must take responsibility and acknowledge the consequences.
“Even though I will be viewed as political victim, this will show that there are people who dissent against the system,” she said. “And yet they cannot speak against it.”
The transgender activist is also to face disciplinary measures from Thammasat University after she launched a controversial campaign last year about student uniforms that came with racy posters, displaying two people wearing uniforms simulating sexual activity. 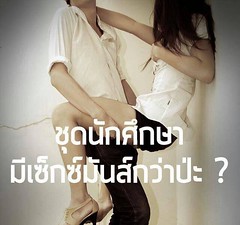 The posters, put up in Thammasat University, shocked school administrators
who had them taken down in two days.
Frustrated with the political stance of Thammasat University Rector Somkid Lertpaitoon, Aum and a dozen of students organized a protest at the University’s Rangsit campus in December, where she replaced the Thai flag with a black flag. The group said it wanted to express its opposition against the rector’s political stance, which was viewed by some faculties and students as pro-establishment.
The action prompted the university to set up a disciplinary committee to investigate Aum’s behavior. In the committee’s documents seen by Prachatai, the committee gathered seven examples of Aum’s inappropriate behaviour and may suspend Aum up to two years.
The examples listed include entering a classroom to greet fellow students wearing a spaghetti-strap top, which the committee viewed as distracting and disrespectful to the lecturer. In another case she wrote online “Thammasat University, the Land of Hypocrisy,” which the committee viewed as defamatory against the university.
“Even though this act of expression was in line with the rights and liberties stipulated by the constitution, this must be done without violating the rights of others and the morals of the society,” noted the committee’s opinion.
News
Article 112
Aum Neko
lese majeste
Thammasat University