Submitted on Thu, 8 Aug 2013 - 11:44 PM
Suluck Lamubol
Asia Books, Thailand’s largest English language bookstore, on Thursday withdrew from their bookshelves two academic titles on Thai history, citing “political sensitivity.” The books concern the history of the 1932 revolution and the controversial relationship between King Rama VI and his palace servants.
Asia Books’ representative declined to give any reason for the books’ withdrawal, but a document sent from Asia Books to the books' distributor, seen by Prachatai, cited the "political sensitivity" as the main reason.
One of the two books withdrawn is “Dream the Impossible Dream” written by Dr. Nattapol Chaiching, history professor of Suan Sunandha Rajabhat University. It studies the role of the People’s Party after the 1932 revolution and the counter-revolution led by the royalists.
The book was published by Fah Diew Kan (Same Sky) publishing house under the “Monarchy Studies Series”
“Nai Nai” (Gentlemen-in-waiting), written by Chanun Yodhong, deals with the relationship between King Rama VI and the servants in the palace. It poses questions about King RamaVI and his projects such as the Boy Scouts and Vajiravudh College, a private boys-only boarding school he founded in 1910.  “Nai Nai” was published by Matichon publishing house. 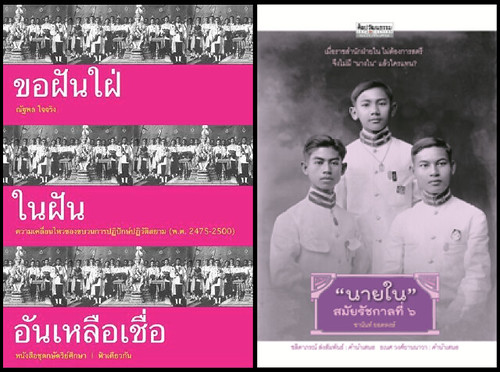 Dream the Impossible Dream by Nattapol Chaiching and Nai Nai by Chanan Yodhong
In 2011, during the Abhisit Vejjajiva government, Kinokuniya and Asia Books also decided not to carry “In Conversation with Thaksin” written by Tom Plate, professor-cum-journalist of Loyola Marymount University in Los Angeles, citing political sensitivity.
Asia Books have not given any explanation as to why they do not sell the book, while Kinokuniya stated that the book was “sensitive” in the social and political context so they have to be “careful,” even though the book ranked 8th in the Straits Times non-fiction bestseller list, as reported by the Strait Times.
In 2009, three issues of The Economist were banned and subscription copies were not distributed due to content relating to the monarchy, lese majesté and the Computer Crime Act.
Correction: August 13, 2013
Dr. Nattapol Chaiching is a history professor of Suan Sunandha Rajabhat University, not Phranakhon Si Ayutthaya Rajabhat University
News
academic freedom
Asia books
History
textbook