The sounds of pretty drum majorettes, cheerleaders and whimsical music were blaring. The colour of pink on the shirts of hundreds of students was being paraded from Chula to a stadium nearby, where the Traditional CU-TU Football Match was about to take place. The once-a-year event is seen by many students as a chance to show their pride, unity and loyalty to their institutions.

It was Saturday morning, February 2. Dozens of students wearing black shirts with the slogan ‘Free Political Prisoners’ on the front, prepared placards, paper masks, and flyers at a university canteen. All wearing paper masks with the face of Somyot Prueksakasemsuk, they were excited about joining the pink parade.
As the pink parade started to pass by, they approached and lined up on parade. One was speaking through a loud-hailer. “Today we want to introduce you to Somyot Prueksakasemsuk, a magazine editor who was sentenced to ten years for publishing articles in a magazine. He is a political prisoner and now his case has received attention and concern worldwide.” 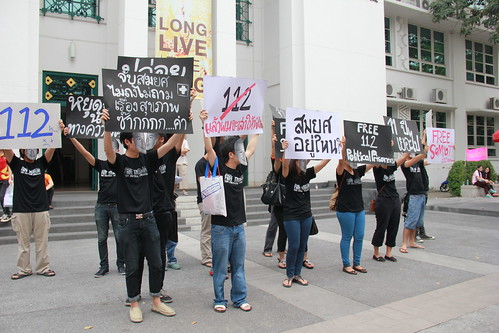 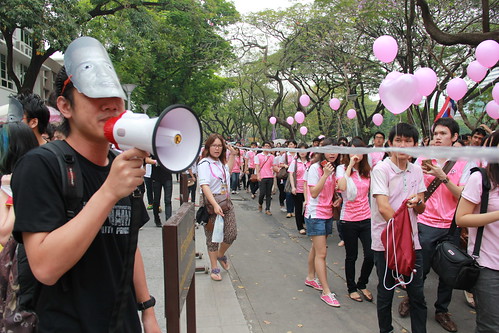 Somyot Prueksakasemsuk, 51, is another prisoner who was recently convicted under Thailand’s lèse majesté law. He received 10 years imprisonment, as a magazine editor, for printing two articles deemed offensive to the monarchy in the Voice of Taksin magazine. Even though he didn’t write the articles himself, the judges said he acknowledged and approved printing them.
But Somyot isn’t just any lèse majesté prisoner. He had been active in Thailand’s labour movement for decades, and fought for the social security system. Before long he was a leader of the 24 June Democracy Group, a red shirt faction, and launched a campaign to abolish the lèse majesté law, as known as Article 112, a law seen by many human rights organizations as a serious violation of freedom of expression.
Most of the students in the pink parade had no idea who Somyot was. The group in black were giving out flyers explaining Somyot’s sentence, freedom of speech, and demands to the government, saying the authorities should try to solve the issue of Article 112, and improve the rights of the accused and of prisoners. 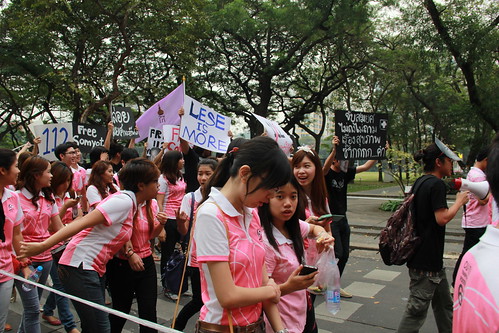 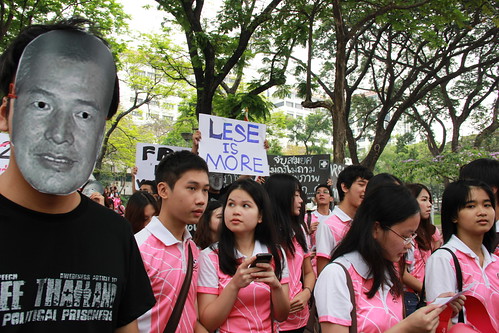 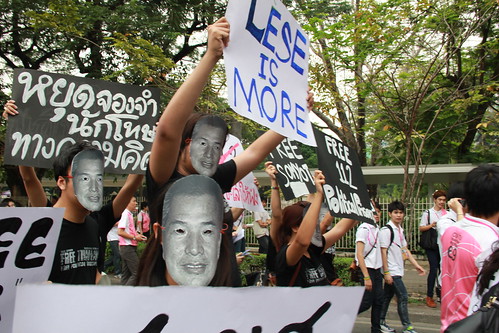 Struggling to stay within the line of the parade, the students in black shirts were finally segregated from the pink rally by the football event staff. The police were asked to deal with the hassle, with doubts whether they were really Chula students. 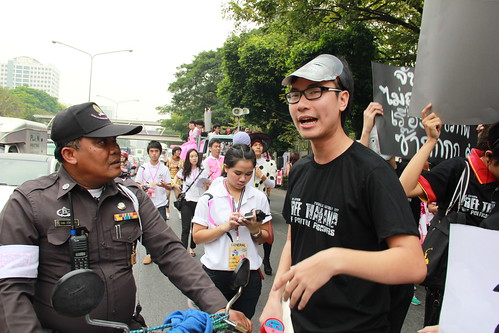 Somyot's son Panitan (Tai) Prueksakasemsuk, Thammasat law student
The group actually contained students from both Chulalongkorn and Thammasat universities. They were from independent student groups called Chulalongkorn Community for the People and the Liberal League of Thammasat for Democracy. 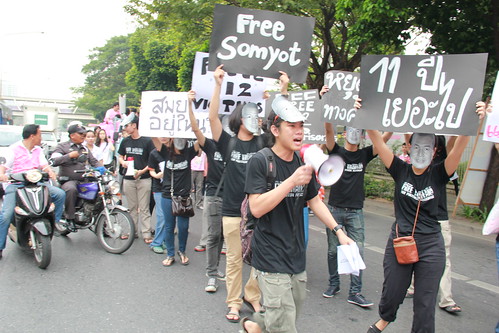 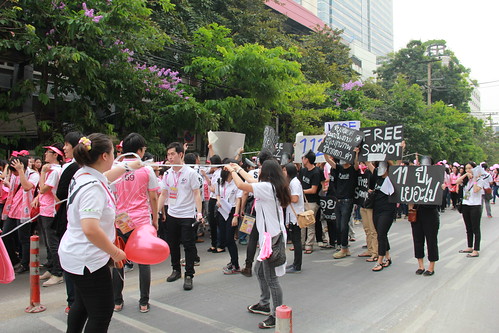 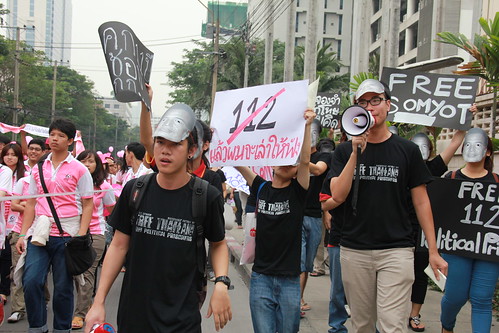 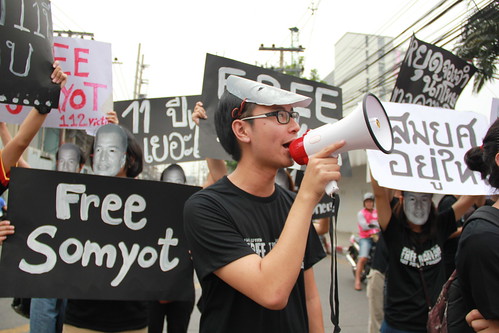 “All we ask for is freedom of expression. The traditional football match isn’t just an entertainment, we also must speak about social issues,” said Din Buadaeng, one of the group leaders, through a loudspeaker. “But if you don’t want us to walk with you, then we resign from being precious Chula students, and walk on this road as common citizens.”
As the parade moved on, one female student in pink shirt yelled, “What the hell do you want? If you don’t like it, then go and live in other country!”
Asked how she felt about the group in black, the same student from the Faculty of Accountancy said since it was political stuff, she didn’t want them meddling with the traditional football event.
Some students were more familiar with Somyot’s name. One freshman student from the Faculty of Political Science said she had seen news about Somyot, though she didn’t know many details. “But I think it was their right to do it, as long as they do it peacefully,” she said, referring to the students campaigning for Somyot.
Indeed the CU-TU traditional football match has lately focused on the cheerleaders, drum majorettes, the carrier of the royal Phra Kiao (symbol of Chula), but the “political parody parade” has also been a highlight of the event.
This year, the parade criticized the 300-baht minimum wage policy, the first car subsidy, the United States “Pivot to Asia” policy as well as the Trans-Pacific Partnership, the leadership of PM Yingluck Shinawatra who often wrongly read from the script, and censorship of the Channel 3 soap opera, Nua Mek.
But indeed the highlight of the traditional football match for some was the black, 6 by 15 metre “Free Somyot” banner that was put up on the terraces in the afternoon. Even though it lasted only for one minute, due to some disturbance in the crowd, it went out live on national television. 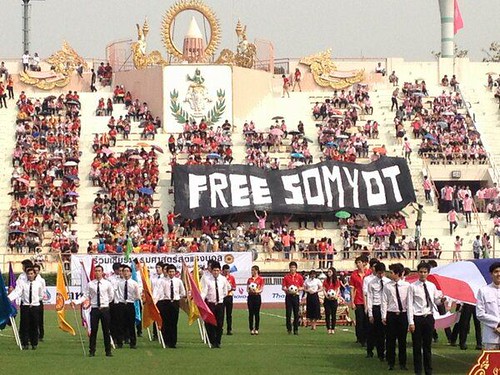 The mainstream media reported widely on the event. Some Thai media, like Matichon Online, Kom Chad Luek and Naewna reported it on the first page, “Tai Prueksakasemsuk (Somyot’s son) led a red shirt group to meddle in the traditional football match, calling for an end to Article 112.” Some Facebook pages, like I support PM Abhisit, stated that the banner “Free Somyot” was a “fraud” and “degraded” the football match.
“We apologize for those affected by our campaign, such as those spectators whose view was blocked by the banner. We just want to express our stance towards injustice in the society, like Somyot Prueksakasemsuk who was jailed for 11 years for breaching Article 112,” said the group in a later statement.
“We wish society to consider our proposals, and invite those who see the injustice in society to join us,” it said.
Opinion
lese majeste
Somyot Prueksakasemsuk
Suluck Lamubol