Home » CRES authorized use of snipers during crackdown in 2010

CRES authorized use of snipers during crackdown in 2010

The Centre for the Resolution of Emergency Situation officially approved the use of snipers during its crackdown on the red shirts in 2010, according to one of its own classified documents, despite the Army Chief’s recent ‘no snipers’ claim.

The document, stamped as classified and very urgent, was submitted to the CRES on 17 April 2010 by its Military Operations Section, asking for approval of a modified plan for military action against the red-shirt protesters, in light of the unanticipated loss of lives and injuries inflicted on the military side on 10 April 2010, which has always officially been attributed to ‘black shirts’ by both the military and the then-in-power Abhisit Vejjajiva government. 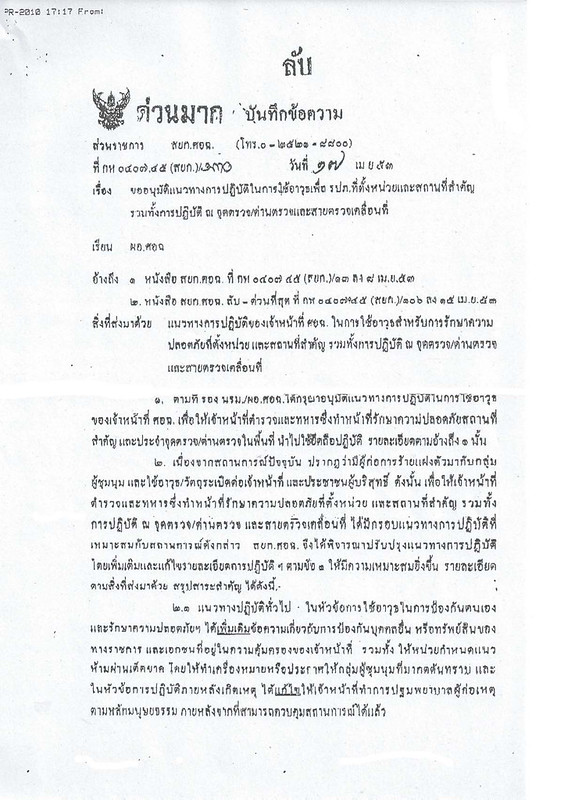 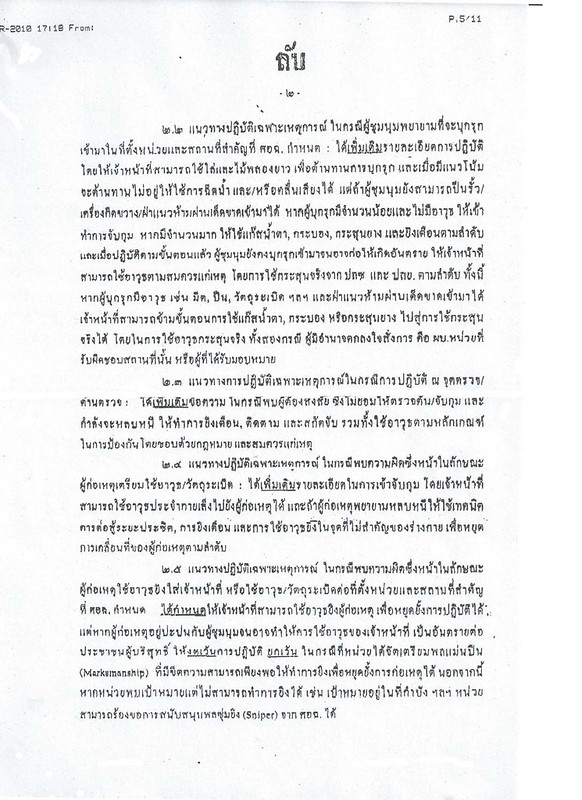 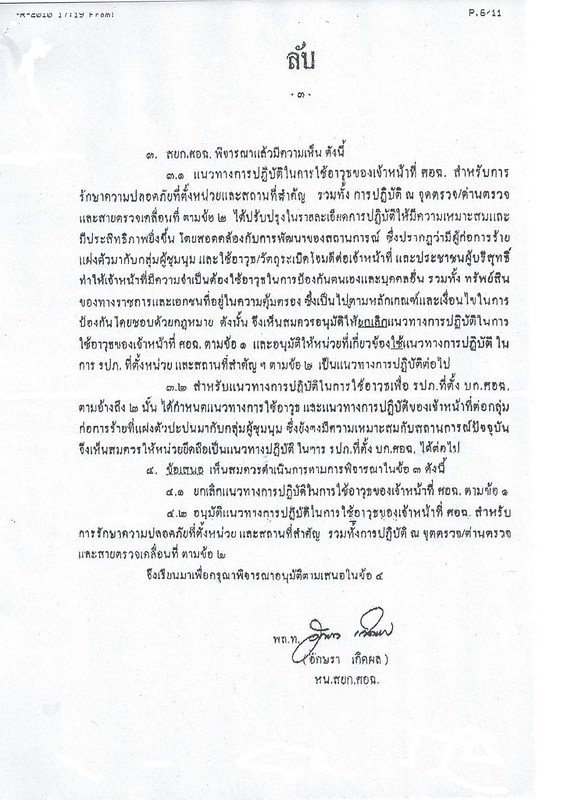 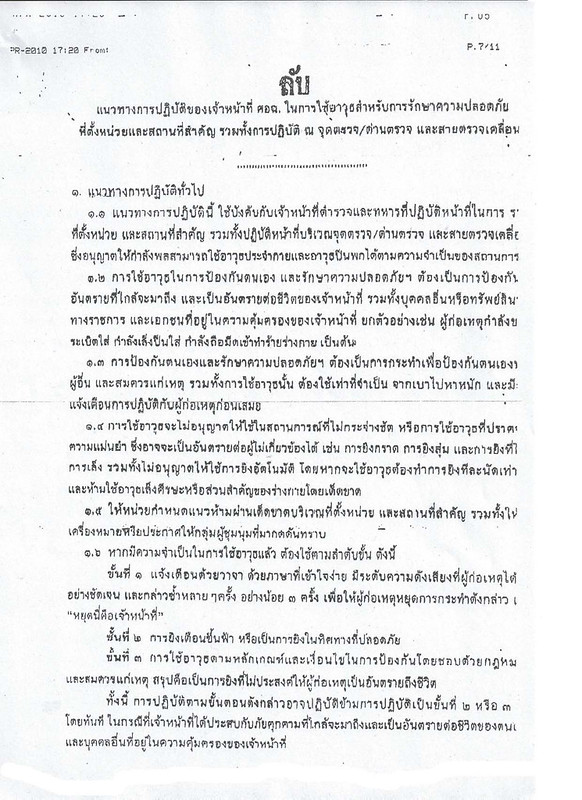 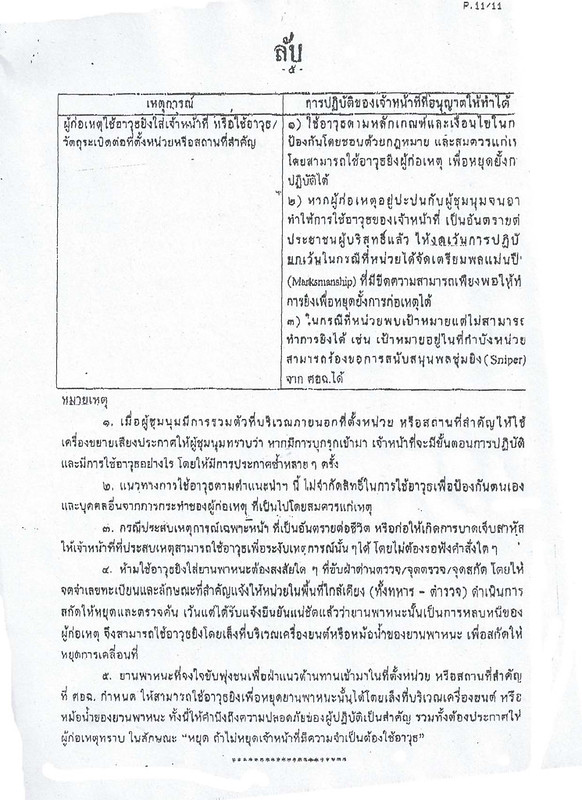 According to Point 2.5 in the document,

‘In the case when [the authorities] find flagrant offences in which the perpetrators are using firearms against officials, or use weapons or explosives against military positions and important premises as specified by the CRES, the authorities are authorized to use firearms against the perpetrators to stop their actions.  But, if the perpetrators are mingling among the protesters to the extent that such use of firearms might endanger innocent people, the use of firearms is prohibited, except in cases where military units have already deployed marksmen sufficiently able to shoot to stop the activities.  In addition, if military units find targets but cannot themselves carry out the shooting, for example, because the targets are shielded, etc., the units can ask for support from snipers from the CRES.’

The document was approved by the CRES on 18 April 2010, signed by then Deputy Prime Minister and CRES Director Suthep Thaugsuban, among other high-ranking military officers. 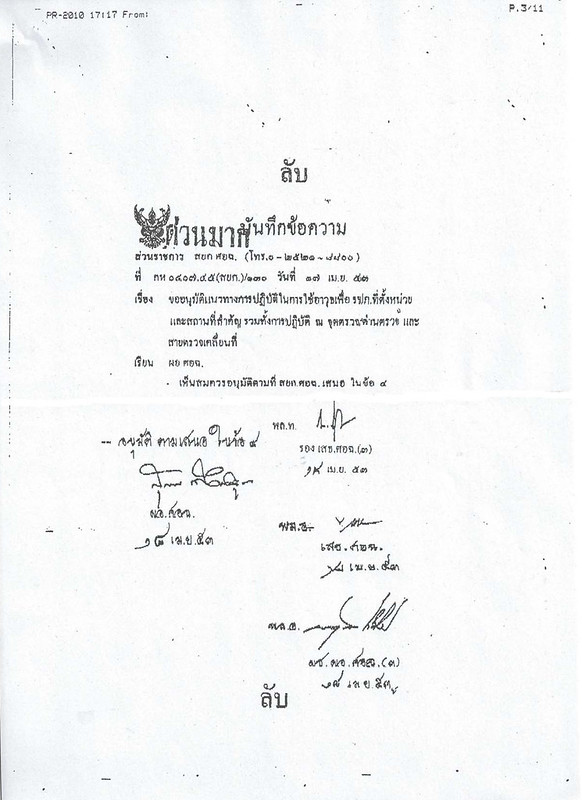 In his interview with the media on 16 Aug, Army Chief Gen Prayuth Chan-ocha denied that the army had employed any snipers during the crackdown.

In response to a question about the fact that the Department of Special Investigation will summon military snipers seen in publicly available video clips for investigation, he retorted, ‘What is a sniper?  What person would use snipers?  And do you know who the snipers are?  Those who appeared to be soldiers [in the photographs or video clips] were just equipped with an enhanced scope. And the enhanced scope and the gun are not a sniper type.  If you say what you don’t know, you’d better shut up.  These things, which are used for marksmanship and are available for sale at informal markets for the purpose of shooting birds, are not sniper stuff.  Don’t just ramble on.’

As for the DSI’s claim that several deaths during the 2010 crackdown were attributed to the security forces, he said, ‘Everything is subject to the judicial process.  If the cases are not yet finished, no one should come out to speak.  I have already begged the DSI Director General Tharit Pengdit regarding this issue.  He promised me to have a look into this, and apologized’, adding that the government has also responded that it will downplay this issue.

According to an investigation by the House Committee on Military Affairs in March last year, only 880 sniper rounds out of 3,000 were returned to the army after disbursement during the crackdown.

He said that he had asked his subordinates as to whether they had ever shot at anyone, but they just answered that they had only been shot at.

DSI Director General Tharit Pendit told Matichon Online on 20 Aug that, although he was a committee member of the now defunct CRES, he had only recently learned of the CRES order about snipers through the media.

As far as he was concerned, he was only aware that the CRES was divided into 4 sections: key politicians including the Prime Minister, Deputy Prime Minister in charge of national security and other relevant cabinet members; police as the law enforcement authority; military personnel as the key security forces; and civil servants, including Permanent Secretaries of all Ministries and Directors-General of relevant government departments.

On a daily basis, the CRES would hold one or two plenary meetings, and also have separate meetings with the security personnel, he said.

The plenary meetings would always include daily reports on developments in the situation over the last 12 or 24 hours, and speculation about what would happen in the next 12-14 hours.  No consultations, decisions or orders would have been made during the meetings, he said.

He, however, saw that the CRES had properly handled the critical situation at that time, despite all criticisms, as it finally managed to bring the country back to normalcy.  Although there was loss of life and injuries among the authorities and civilians, further carnage and brutality was prevented, he said.

He insisted that the issuance of such orders did not need to be approved by the CRES plenary meeting.

The Military Operations Section meetings would be chaired by the CRES Director, sometimes in the presence of Prime Minister, he said.

Army spokesperson Col Sansern Kaewkamnerd admitted that the classified document was authentic, but expressed doubts about the real motivation of those who had leaked it.

He said that there was nothing new about it, as he, as the CRES spokesperson at the time, had already explained to the public about the authorities’ adherence to international standard practices in dealing with protesters.

Only when the authorities could not prevent illegal harm from happening to innocent people, did they resort to the use of marksmen, he said.

‘The army never used snipers.  We call the officers who carry out orders marksmen.  Other people can call them whatever name they wish. Mostly, they try to use the term ‘snipers’ which sounds scarier,’ he said.

During the past couple of weeks, certain groups of people have tried to spread news to mislead the public into understanding that the military had used excessive force and harmed the protesters.  However, the military is not worried, because this is nothing new and everything has already been explained, he said.

Col Sansern Kaewkamnerd explained on 'snipers' clip on 16 May 2010, calling the soldiers in question as 'marksmen' or 'sharpshooters'