The Asian Human Rights Commission is appalled at the recent decision by the Supreme Court of Thailand to uphold the conviction of Ms. Jintana Kaewkhao of Prachuab Khiri Khan province for her efforts to exercise fundamental human rights and defend the basic interests of her community. 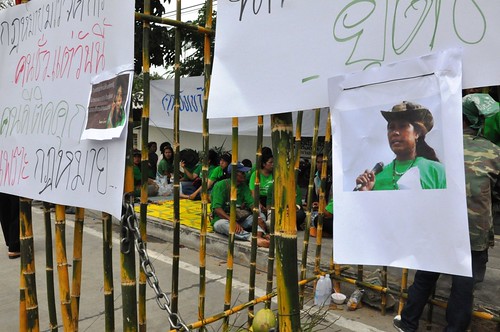 For more than ten years, Jintana has fought against coal-fired power and other environmentally destructive development projects in the Hin Krut and Bo Nok areas of the province. She and her colleagues in the Bo Nok-Hin Krut Nature and Environmental Conservation Group successfully prevented the construction of coal-fired power plants in their communities and have worked to develop clean and environmentally conscious forms of power. Yet, she is now serving four months' imprisonment for alleged trespass onto the grounds of the company leading the efforts to build the coal-fired power plant. The final decision of the Supreme Court in her case, arrived at after eight years, indicates how the right of people in Thailand to protest and defend their communities from harmful environmental consequences has effectively been made illegal.

The initial case against Jintana was heard in the provincial court in Prachuab Khiri Khan province (Black case no. 1480/2545; Red case no. 3283/2546). The prosecutor alleged that the plaintiffs, who were the management of the office of Union Power Development in Prachuab Khiri Khan, were holding a party on the afternoon of 13 January 2004. While they were setting the table and otherwise preparing the room, a group of people burst into the room and threw a rancid substance on the table and in the ice buckets. Jintana testified that she went to the offices of the company on that afternoon, but was there with other activists in order to present a petition to the company. When they arrived, they were met by a group of over 50 tough-looking men, and decided to return home instead. There was a clear discrepancy in the testimony of the prosecution witnesses and that of Jintana; further, while some prosecution witnesses claimed that Jintana was the leader of the people who came into the dining room, other did not recognize her as among the group of trespassers. On the basis of this discrepancy, the provincial court dismissed the charges. The provincial court also made reference to the broader context of the opposition to the coal-fired power plant and the environmental, health and occupational reasons why Ms. Jintana and other community members and activists in Bo Nok and Hin Krut organized against the proposed plant. (Some more details are available here: http://www.article2.org/mainfile.php/0603/282/.)

The plaintiff appealed this decision and on 1 August 2005, the Court of Appeal for the 7th Region overturned the dismissal and convicted Jintana under sections 362 and 365(2) of the Criminal Code for trespassing in a group of two or more persons (Black case no. 3533/2546; Red case no. 2355/2548). The court overturned the decision of the provincial court on the basis that the evidence indicated that Jintana was present at the offices of the Union Power Development Company on the day in which the party was disrupted. While the court noted that there were discrepancies in the testimony of the plaintiff, it maintained that the defendant did not provide sufficient evidence to prove that she was not guilty of trespassing and leading others to throw a rancid substance on the dining tables. The court further noted that the discrepancies in the testimonies of the plaintiffs might have arisen because they were "afraid of the influence of the defendant, who was a leader of the group opposing the coal-fired power plant in Hin Krut". On this basis, the court sentenced Jintana to six months in prison.

The defendant appealed the verdict, and the Supreme Court upheld the decision and sentenced Jintana to four months in prison in a decision dated 20 December 2010 (Supreme Court case no. 13005/2553), which was read out in the Prachuab Khiri Khan Provincial Court on 11 October 2011. The Supreme Court noted that in this case what is at issue is whether or not the defendant was the leader of the people who trespassed and dumped a rancid substance on the tables of the Union Power Development Company. It found that the inconsistencies in the testimony of the plaintiffs and the failure of some prosecution witnesses to identify Jintana did not diminish the weight of the testimony. The Supreme Court further held that since there was no evidence to suggest that the plaintiff had a pre-existing conflict with the defendant, there was no reason to believe the bringing of charges was malicious. Since the defence was unable to provide conclusive evidence that Jintana was not the leader of the group who trespassed prior to the lunch party, the Supreme Court upheld the decision. The sentence was reduced on the ground that the accused had cooperated with the process. She began serving her sentence in the Prachuab Khiri Khan provincial prison after the decision was read on October 11.

In a Thai-language article for Krungthep Thurakij newspaper online on 29 September 2011 (here), Professor Somchai Preechasilpakul, Chiang Mai University law lecturer and expert on environmental and human rights law, raised a series of significant issues regarding this case. Primary among them, he underscored the importance of this case to the movement for environmental and community rights in Thailand. He also linked the case to questions of rights under successive constitutions, given that when Jintana was charged the 1997 Constitution was still in effect, but it was subsequently superseded by the 2007 version.

The Asian Human Rights Commission wishes to draw attention to this last point as since the time of the 2006 coup it stressed that the reassertion of military power and faux constitutionalism that followed would inevitably result in a resurgence of precisely the type of anti-human rights thinking and jurisprudence as shown in this case. Indeed, this sort of ruling can be but attributed to the court's complete disconnection from reality, if not its deliberate disregard for it. The notion that the plaintiffs in the current case might have had cause to fear the "influence" of the defendant is not only profoundly wrong but it is also profoundly disturbing. In Thailand, the reference to a person of "influence" carries a particular connotation attached to persons with linkages to others in power. It refers to a confluence of private and state influences, which have access to and are not afraid to use extrajudicial means to secure their interests. For the Court of Appeal to use this language with reference to Jintana, and for the Supreme Court to not challenge it, is not only incorrect but also extremely cynical, and an indicator of the extent to which human rights defenders in Thailand are again increasingly cast as troublemakers and evildoers who are against the interests of the state.

Like human rights defenders throughout the country, Jintana and her colleagues in Prachuab Khiri Khan have long faced intimidation and harassment by private capitalists and the state officials who collude with them. It is not those who fight for human rights but those who oppose them who have resorted to open violence. Let us not forget that on 21 June 2004, Mr. Charoen Wat-aksorn, another leader against the coal-fired power plant and other environmental destruction in Prachuab Khiri Khan, was assassinated as he alighted from a bus after returning from testifying in front of the Senate in Bangkok (see AHRC-UA-76-2004 for more information on his assassination). Earlier this year, on 31 January 2011, Mr. Pachern Ketkaew, yet another colleague of Jintana, survived an assassination attempt. Pachern has worked against another proposed power generation project in Prachuab Khan, one that rather than using coal as raw material has a planned source material of trash. While the methods are different – legal sanction as opposed to extrajudicial violence – the cases of Jintana Kaewkhao, Charoen Wat-aksorn, and Pachern Ketkaew all indicate the continued risks that anyone in Thailand faces for attempting to do no more than defend a community and the health of its people against those who would destroy it in the mad scramble for profit.

About AHRC: The Asian Human Rights Commission is a regional non-governmental organisation monitoring and lobbying human rights issues in Asia. The Hong Kong-based group was founded in 1984.