Home » I was like a slave: Hmong women use TikTok to reveal married exploitation

I was like a slave: Hmong women use TikTok to reveal married exploitation

Young Hmong wives are using TikTok to expose the slave-like conditions they have to ensure with their husbands’ families. Despite the bonds of kinship, their lives of unpaid labour and denied freedoms are seen by experts as crossing a red line under anti-human trafficking law.

A TikTok post from @mivni39 shows women cooking in an old-fashioned kitchen. The caption says "Hmong woman is the toughest one. Tell me who's tougher."

These are the words of Pakkhom, 20, a young Hmong wife whose TikTok account has over 470,000 followers. She is one among many Hmong TikTokers who have been using the platform to tell the public of the burden they have to shoulder each day. Their hardship can be found by the hashtags #ลูกสะใภ้ม้ง #สะใภ้ม้ง (Hmong daughter-in law) and #สาวม้ง (Hmong woman).

By monitoring TikTok and interviewing 8 Hmong women, we found many Hmong women of 15-16 years of age were involved in forced and arranged marriages in line with their ethnic culture.

They moved into the husband’s home where they were subjected to long hours of work in the family’s business, such as running a resort, store or farm, and in housework. In return for working over 12 hours per day for 1 to 3 years, they were paid 500 to 30,000 Baht, about 15 to 873 US Dollars. They later decided to part ways with their husbands.

Some legal experts see their fate as constituting forced labour as defined under the Prevention and Suppression of Human Trafficking Act B.E. 2551 (2008).

“It is conceivable that this may be modern slavery, because daughters-in-law have no negotiating power. … They don’t get wages, they work hard from dawn till dusk, and they receive no welfare because it is seen as family work, so according to the law, they do not count as part of the workforce,” said Suchart Trakoonhuthip, coordinator of the MAP Foundation, a civil society organization that addresses ethnic labour issues. 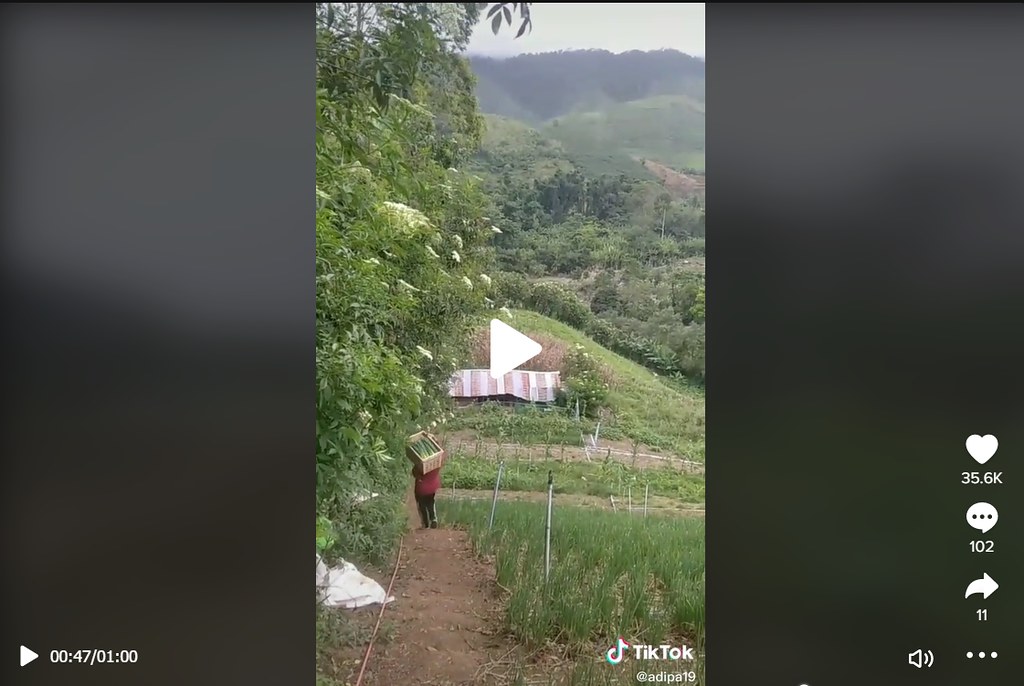 Pakkhom said she has to get up at four or five in the morning to do the housework and get breakfast. Then she goes to the scallion field to gather the flowers, add fertiliser, and weed. She is in the field until dusk before returning home to cook and do house chores, sleep, and repeat the schedule without a day off. Free time was spent planting vegetables at home, gathering firewood, and making Hmong garments to wear. 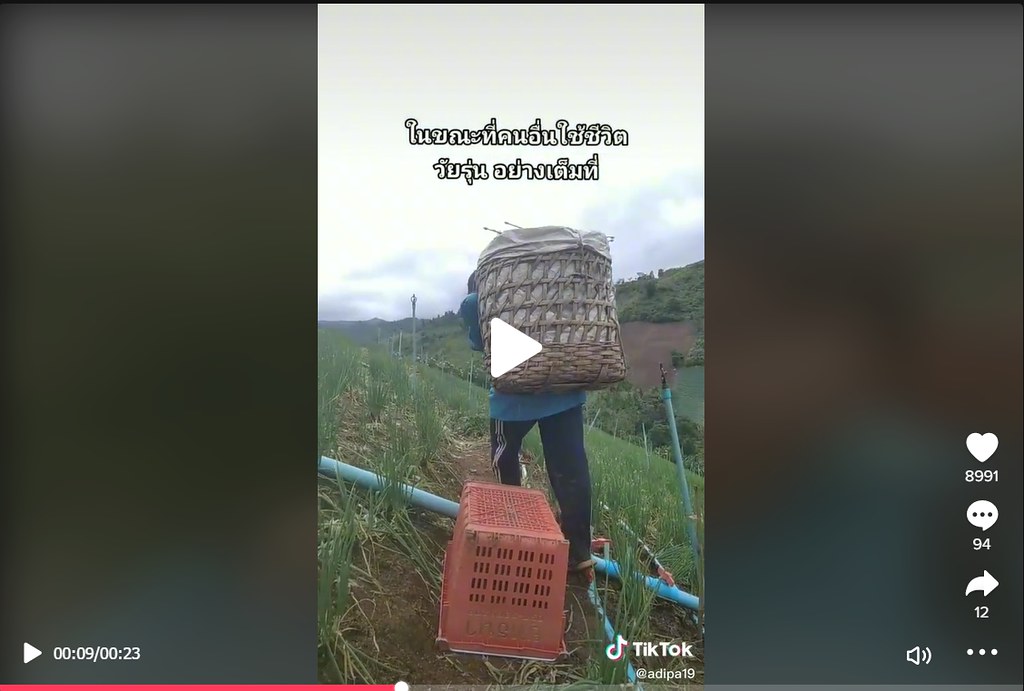 Another post on Hmong women daily live by @adipa19. The caption says "While others live their young lives fully."

“When men actually take us as wife, we have no freedom. It’s just like slavery. Hmong daughters-in-law will be involved in farming, gardening, and housework, everything. No matter where we want to go, we have to get permission from our mother-in-law,” said Pakkhom.

At least 3 Hmong women said in interviews that they had to work hard because the Hmong believe that when women are married, their bodies and souls move into their husband’s families and that the women’s guardian spirits will also be replaced by those of the husbands’ families.

This belief makes divorce difficult, not to mention the stigma when the community in some areas believe that widows bring disaster to the family.

Tawan (pseudonym), 20, another Hmong woman, said with a feeling of unease that she had to work at her husband’s resort and Chinese cabbage field in Phetchabun Province. But when all the hard work is done, her husband is the one who handles all the income.

“At that time, I was clearly like a slave, a menial. … Everyone else was employed at tens of thousands [of baht] a month. They just had to do the cleaning. They did not have to cook at night. … [The employees] only worked from 8 to 5, and then they could go home and rest,” said Tawan.

Many Hmong interviewees said they had to receive permission to go out or spend money, depriving them of the freedom to enjoy personal lives or travel back to see their own families.

Waew (pseudonym), 26, another Hmong woman, said her parents-in-law forbade her to wear a skirt or associate with friends at any social gathering. Her mother-in-law usually picked on her, damaging her self-confidence. And when she wanted to talk about her opinion or stress, they brushed it aside, seeing it as nothing of importance.

“I felt really worthless. Sometimes I wanted to cry and go back home to see my mother. I never cooked for my mother, so why does she still praise me as a good, capable and hard-working person? But now I’m with them, whatever I do, they are not pleased,” said Waew in tears.

Three legal experts said the way the Hmong women were made to work may constitute a violation of Section 6/1 of the anti-human trafficking law as constituting forced labour or forced service. Offenders can be given a 6-month prison term or 50,000 baht fine. If the forced labour victim dies, the offender may also face the death penalty.

Papop Siamhan, an independent lawyer, said the cases mentioned may count as forced labour when checked against the International Labour Organization’s Key Indicators of Forced Labour in that the women were made subject their husband’s families’ orders via labour exploitation with no payment and with deprivation of their freedoms.

“They are overlapping issues … a dimension of law enforcement and a dimension of tradition. … If we enforce the law directly, many Hmong will be face charges with serious criminal punishments.

“Creating an understanding of human rights among the Hmong community may create more sustainability,” said Papop.

Raporn Pongpanitanon , an expert from the Office of Women's Affairs and Family Development, Ministry of Social Development and Human Security, said what the Hmong women had been through counts as domestic violence and that the offenders could be charged under the Victims of Domestic Violence Victim Protection Act, B.E.2550 (2007).

Raporn, however, said the details have to be looked into in order to proceed with charges, and that the law has usually been used in business cases rather than family disputes.

Waew recounted the day she moved into her husband’s house in Mae Hong Son Province. She was made to replace three employees who were hired at 250 baht a day. Working in place of three people meant that she had to work 14 hours a day but without any payment. Her husband's family were the ones who got all the money.

“I was pregnant, but they still had no pity. They still used me to lift heavy things… I lifted it till my stomach went hard. It hurt. I went to lie down for a moment, and they called me back to work,” said Waew.

After this, she decided to part ways with her husband in 2019 to live her own life.

“I’ve made a mistake once. The big one in my life. I won’t do it again. I was once married, but it turned out worthless. But today I see my own value. I have the right to choose. I listen to my own heart as best I can, and move forward,” said Waew.

Beside Waew, Tawan also took her 2-year-old child out of her husband’s house and moved to a strawberry farm in Udon Thani. However, many Hmong women still have different reasons to not follow suit and stay with their husbands.

This article was written as part of media training by Thomson Reuters Foundation. The authors are responsible for all the original published content.