Students at Mahasarakham University attempted to protest during the university’s graduation event, before being stopped by police and military officers, one of whom pushed a student into a nearby pond. 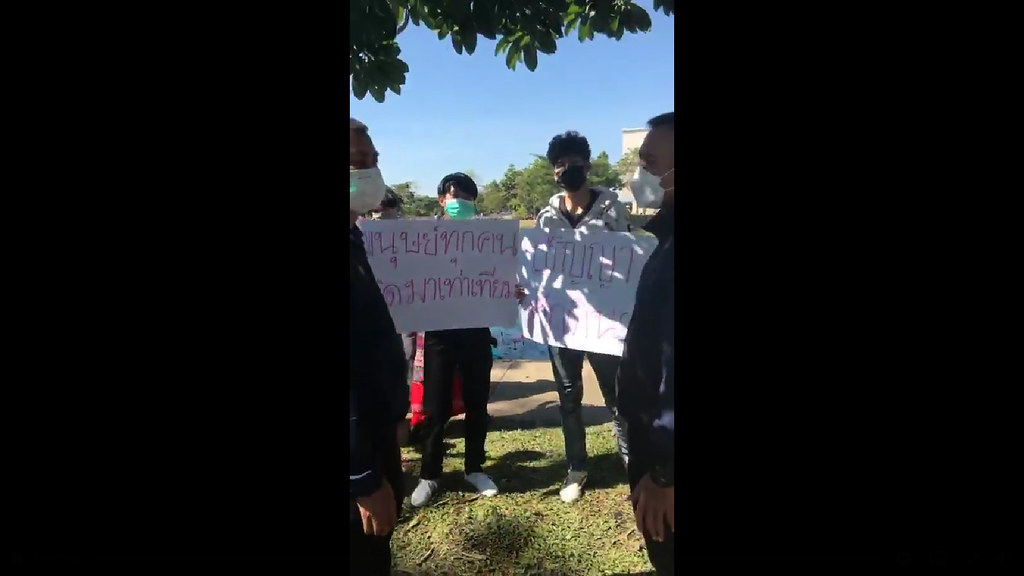 In a Facebook live video broadcast at around 13.00 on 20 December by the student activist group Move High, two students were seen standing among family members of graduates waiting for the ceremony, which was presided over by Princess Sirindhorn, King Vajiralongkorn’s younger sister. The students were holding signs saying “All humans are born equal” and “Feudal degrees” and were surrounded by plainclothes police officers.

While walking away from the spot where they were originally standing, they were surrounded by plainclothes and uniformed military officers, who told them to put the signs away and leave. As they were passing a pond on campus, an officer attempted to seize the signs, pushing them into the water in the process.

Kriangkrai Banchongpuk, a 1st year student from the Mahasarakham University’s College of Politics and Governance, said that the students wanted to show that everyone is equal, royal or not, and that graduates do not need to receive their degree certificates from members of the royal family. He said that the certificates can be given by a university dean or the students’ lecturers or parents to reduce the cost of organizing a graduation ceremony.

He said that the students were told the officers would escort them out, but he believed they were tricked as the officers led them behind a building and tried to take their signs away. Once they refused to put the signs away, the officers tried to pull the signs out of their hands and in the process pushed Kriangkrai into a nearby pond.

After Kriangkrai’s friends pulled him out of the water, a police officer who said he was an inspector from the Muang Mahasarakham Police Station came to apologize to them and said that they will be allowed to leave campus without being followed. However, Kriangkrai noted that the officer knew his name even though he did not know the officer.

Nevertheless, the students were followed by three plainclothes officers who approached them and asked them to go to the police station for ‘a talk’ and coffee. They initially refused but had to relent and were taken to a nearby coffee shop before another friend came to pick them up.

Once the students arrived at their home, they were visited by plainclothes police officer, a uniformed military officer, and an official from the Ministry of Social Development and Human Security who said they had come to monitor the students because they were concerned the students would try to protest again. The officers only left the house after the end of the graduation ceremony, when Princess Sirindhorn left the campus.