A monarchy supporter with a large online following was arrested on Saturday, hours after he claimed to have raised nearly 700,000 baht to cover the cost of what he described as a ritual to extend the life of King Vajiralongkorn’s eldest child. 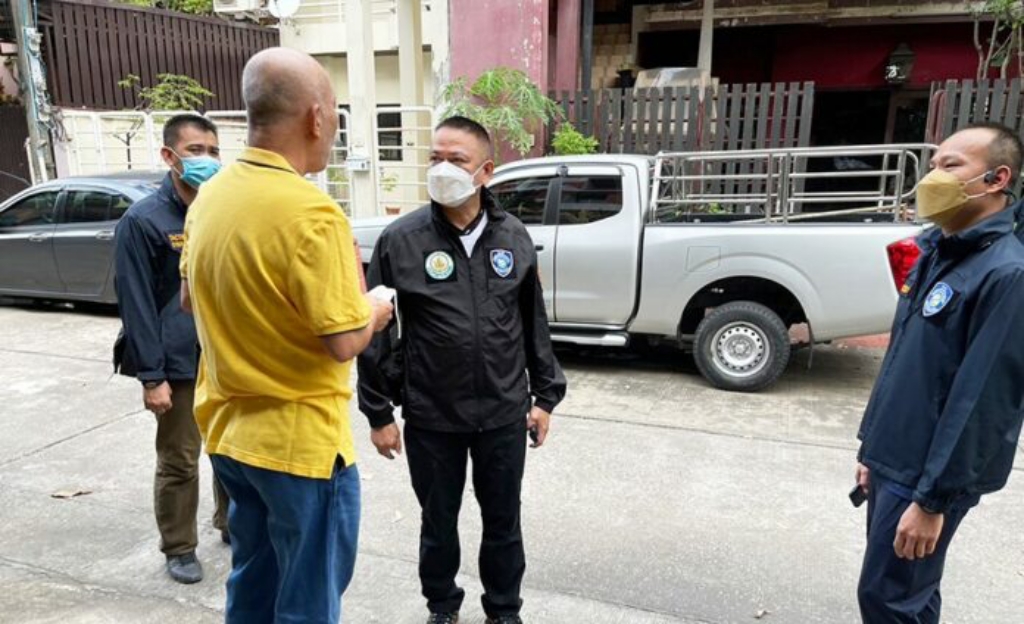 Police officers talk to Suvinai Pornavalai outside his residence in Bangkok on 17 December 2022.

Suvinai Pornavalai, 66, may violate the fraud and “publishing false information” charges for his brief donation drive, police announced in a news conference, though he was spared the more serious charge of royal defamation. A police official said Suvinai maintained he was innocent and was acting out of his goodwill for Princess Bajrakitiyabha, who remains hospitalised for unspecified heart conditions.

“He cooperated well with the authorities,” Pol Maj Gen Wiwat Khamchamnan, commander of a cybercrime unit, told reporters. “He said he didn’t have any ill intention. He was merely seeing that, since science cannot help, he has to rely on rituals.”

Suvinai, a retired economics lecturer at Thammasat University, wrote to his 52,000 followers on Friday he has learned the means of communicating to supernatural entities, and that he will harness them for a divine intervention on behalf of the 44-year-old princess.

What he needed, he wrote, is money to cover the cost.

“This mission really exceeds my current financial capacity to see it through smoothly,” Suvinai wrote, with details of his bank account numbers at the end of his post.

Hours later, Suvinai reported that the first of his three sets of rituals has been commenced, and he’s raised over 600,000 baht, “close to 700,000 baht,” for the initiative. The royalist also said he decided to end the fundraising, per advice from someone close to him.

But that did not stop police from paying a visit to Suvinai’s home in Bangkok after many social media users shared his post and debated whether the rituals amounted to making quick bucks on the public's concerns over the princess’ health.

Suvinai was taken to a police station and told that police were considering charging him with defrauding the public, along with violating the Computer Crimes Act, which bans publication of “false information” over the internet. Pol Maj Gen Wiwat, the cybercrime unit commander, said Suvinai appears to have already spent 300,000 baht of the donations on his rituals. It is not clear whether any charges were eventually filed

Wiwat said anyone who donated the money can seek its return by contacting the police.

“I’d like to ask the public to be careful when posting anything that may defame the high institution at this time,” he said, using a euphemism for the monarchy.

King Vajiralongkorn and Queen Suthida tested positive for COVID-19, the palace announced on Saturday, just hours after the pair paid a visit to the hospital where Princess Bajrakitiyabha is receiving treatment.

The statement said their conditions are “mild” and they were advised to refrain from taking up royal duties in the meantime. The news came just as the government is gearing up religious rituals across the country to pray for the princess’ recovery – a campaign taken by many netizens as a sign that her condition may be more serious than what the authorities communicated to the public so far.

Princess Bajrakitiyabha, or Princess Bha, collapsed and lost her consciousness from a heart-released ailment during a military dog training in Nakhon Ratchasima earlier this week, according to the palace.

She remains hospitalized at King Chulalongkorn Memorial Hospital in Bangkok. The palace has said little about the nature of her illness, and It is unclear whether she’s regained consciousness.

The King and Queen were among members of the Royal Family to visit the hospital in recent days. Photos and videos taken by a crowd of well-wishers and posted on social media show the royal couple in athletic clothes, wearing facemasks, waving to their supporters at the hospital on Friday.

It is not immediately clear when the king and queen would be visiting the hospital again, given their infection from COVID-19.

The princess is the only child of King Vajiralongkorn and his first marriage, Princess Soamsawali. Princess Bha, who serves as a commander in the King’s royal bodyguard unit, is recognised by many monarchy watchers as the potential next-in-line for the throne, though the decision to name an heir rests solely with the King.

Regardless of her position in the succession pathway, Princess Bha’s sudden illness still came as a shock to many Thais, who have known her as an athletic and active member of the Royal Family. Perhaps as a reflection of anxiety felt in the halls of power, the Ministry of Interior Affairs on Friday evening instructed local administrations in all provinces to stage religious ceremonies to wish Princess Bha a speedy recovery.

Apart from prayer sessions, the order also suggests hosting other charitable activities, such as blood donation drives, food alms to monks, and release of fish and animals that are meant to be butchered.

In Nan province, local officials gave alms to a gathering of 700 monks in hope of improving Princess Bha’s health.

The scale of such events surpassed previous similar undertakings when other members of the Royal Family were hospitalized in recent years, such as King’s Vajiralongkorn’s mother, Queen Sirikit and his sister, Princess Maha Chakri Sirindhorn.