Around the launch of its global report on protests, CIVICUS, a global civil society alliance, calls on the Thai government to halt its criminalisation of protesters and drop all charges against them. Further, the government must ensure accountability for violations carried out by the security forces while policing protests. 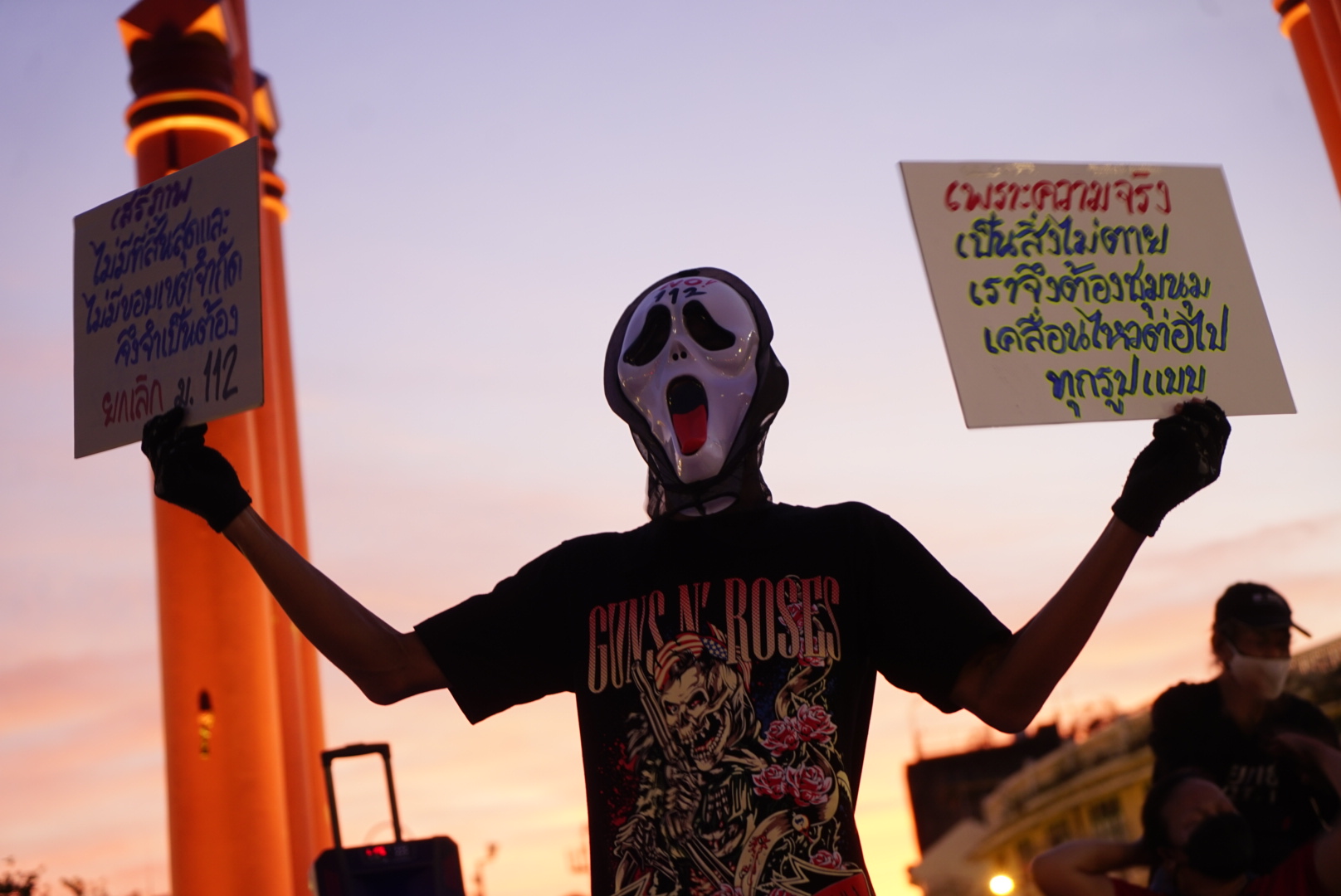 Monitoring by the CIVICUS Monitor throughout the year shows that in Thailand, hundreds of protesters were charged for violating the Emergency Decree which banned gatherings in response to the COVID-19 pandemic. The decree was lifted in September 2022. Other protesters have faced lese-majeste or sedition charges.

Some have consistently been denied bail or forced to wear electronic monitoring bracelets as part of their bail conditions. There are also concerns that the Pegasus spyware was found on the phones of dozens of Thai activists including protesters. There has also been a failure to investigate police use of excessive force including water cannon, rubber bullets and tear gas to disperse protests. Protesters have been detained and suffered injuries, including children.

These actions appear to be inconsistent with Thailand’s obligations under the UN International Covenant on Civil and Political Rights (ICCPR).

All across the Asia Pacific region, from Afghanistan to Fiji, the right to protest continues to face restrictions and attacks. A new global assessment by the CIVICUS Monitor, an online research platform that tracks fundamental freedoms in 197 countries and territories, shows that protesters in the region faced challenges before, during and after protests.

In China, Vietnam, and Laos, where civic space is rated as ‘closed’, freedom of peaceful assembly is tightly restricted in law and practice. In Sri Lanka, the government repeatedly used state of emergency regulations to curtail mass protests related to the economic crisis while in Afghanistan, following the Taliban takeover, the Taliban announced a ban on all protests in Kabul and other provinces without prior authorisation. An emergency decree to handle the COVID-19 pandemic continued to be used in Thailand until the end of September 2022 to ban protests.

Even in the Pacific, where civic space is relatively open, there are concerns. In Australia, in 2022, three states passed anti-protest laws that invoke harsh penalties for non-violent protest, particularly aimed at climate protesters.

Across the region, protests were documented in at least 27 countries over the last year with detentions reported in 20 countries. In Sri Lanka, the authorities arrested and detained suspects without warrants and due process safeguards. Protesters from the Papua region of Indonesia continued to face arrests from security forces for demanding an end to discrimination and exploitation.

“In many countries in the Asia Pacific region, states used emergency regulations, anti-protest laws and even COVID-19 measures to block or disrupt protests as well as arrest and detain protesters demanding political and economic reforms, the end to discrimination, climate justice or worker rights. These actions are contrary to international human rights law and standards and create a chilling environment for those who speak out and mobilise”, said Josef Benedict, Civic Space Researcher at the CIVICUS Monitor..

The use of excessive force by security forces was documented in at least 14 countries in the Asia Pacific region during the year. In Myanmar, the junta continued its violent crackdown on anti-coup protests in 2022 using lethal weapons while in Afghanistan, the Taliban responded to protests by women activists by pointing firearms at them or firing in the air as well as beating, threatening and insulting the protesters. In Sri Lanka, police used excessive and unprovoked force, including tear gas, water cannons and rubber bullets against peaceful protesters, bystanders, and journalists

Killings of protesters by security forces were documented in at least four countries in the last year, especially in Myanmar, where more than a thousand have been killed by the junta. Other countries where this occurred include Nepal, Sri Lanka and Indonesia.

Even after protests, protesters continued to be targeted. A range of public order, national security, and other laws were used to criminalise protesters.

In Myanmar, thousands of anti-coup protesters languish in detention on trumped up charges of ‘incitement’ or ‘treason’ after facing secret military tribunals, with hundreds being tortured or ill-treated with impunity.

In India, student protesters, remain in detention without bail under the Unlawful Activities (Prevention) Act (UAPA), an anti-terrorism law, for their involvement in demonstrations against the discriminatory Citizenship Amendment Act (CAA) while in Hong Kong, numerous activists have been jailed for protests under the Public Order Ordinance which carries a five-year maximum sentence.

“Scores of protesters in the Asia region have been jailed on spurious charges or remain in pre-trial detention for long periods and have been denied bail. Some have been tortured and ill-treated. There has also been a lack of accountability for injuries and the killing of protesters which highlights the climate of impunity in the region” added Benedict

The CIVICUS Monitor data shows that restrictions to freedom of peaceful assembly have occurred in at least 100 countries from October 2021-September 2022. The detention of protesters is the most prevalent violation. Those exercising their fundamental freedoms have been detained in at least 92 countries over the past year.

Excessive force has also been a recurring theme of this year’s protests. Demonstrators have been met with water-cannons, batons, tear-gas and other acts of brute-force in over 40 percent of the countries recording protests. Most disturbing of all has been the unlawful killing of protesters, which has occurred in at least 24 countries.

Over twenty organisations collaborate on the CIVICUS Monitor, an online platform, which tracks restrictions to civic freedoms across the globe. The research coalition tracks a total of 33 different restrictions related to freedom of association, freedom of expression and freedom of peaceful assembly. The data also provides the basis for national civic space ratings, countries can be categorised as either closed, repressed, obstructed, narrowed or open.