A protester was arrested on Friday (25 November) and subsequently denied bail on a contempt of court charge resulting from a speech demanding bail for a detained activist. 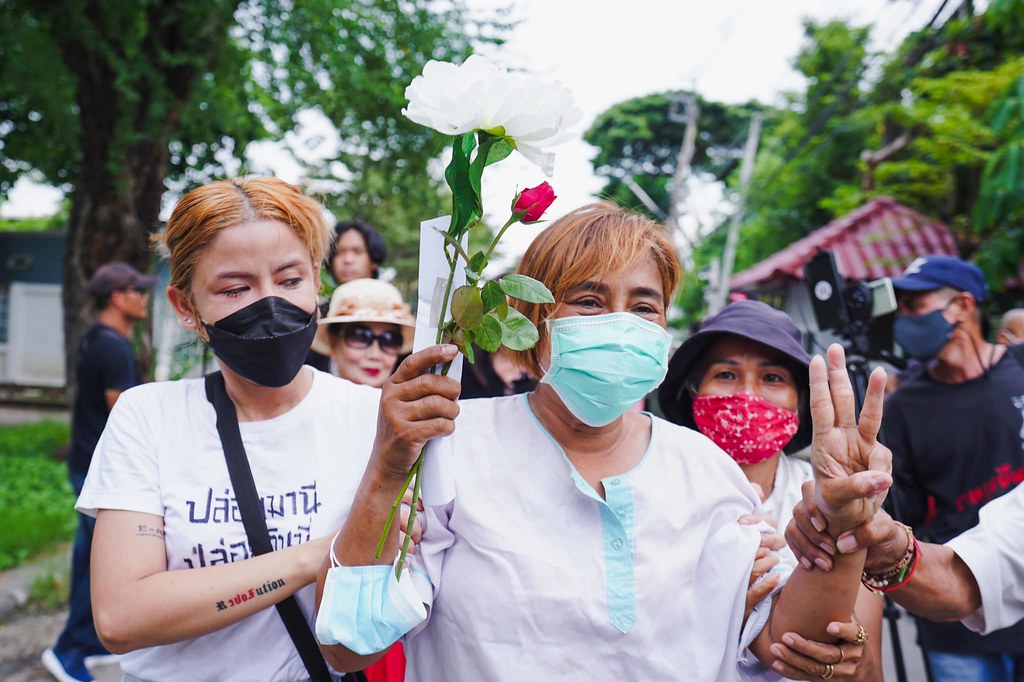 54-year-old Chiratchaya “Ginny” Sakunthong was arrested last Friday (25 November) while traveling from the South Bangkok Criminal Court, where a small crowd of pro-democracy protesters gathered as the ultra-royalist group the People’s Centre to Protect the Monarchy was giving a press conference after they filed petitions with the court to revoke bail for activists Tantawan Tuatulanon, Patsaravalee Tanakitvibulpon, Nutthanit Duangmusit, and Netiporn Sanesangkhom, supposedly for being involved in anti-government protests during the APEC meetings.

Chiratchaya was stopped by plainclothes police officers while riding a motorcycle past the Robinson Bangrak shopping mall. The officers presented an arrest warrant issued on 18 October by the South Bangkok Criminal Court on charges of contempt of court, defamation by publication, and using a sound amplifier without permission.

She was taken to Yannawa Police Station on the back of a police officer’s motorcycle. However, once she arrived at the police station, Chiratchaya was told that she would be taken to the police club on Vibhavadi Road. She was then put into a police truck, but instead of heading to the police club, the officers drove back to Yannawa Police Station. They also drove up and down Sathorn Road several times because ultra-royalist protesters were gathering in front of the police station.

According to the inquiry officer, Chiratchaya said that it was shameful for the police and the court to accept the cases against pro-democracy activists, and that the police should have dismissed these complaints. She also said that the court does not consider the ethics of their occupation before accepting these cases, and that this situation is not lawful. The police claimed that the content of her speech was defamatory and amounted to contempt of court.

Chiratchaya was detained overnight at Yannawa Police Station before being taken to court on Saturday (26 November). The South Bangkok Criminal Court then denied her bail on the ground that her speech contained unfounded accusations aimed to pressure the court on bail requests. The court also said that she was a flight risk and that she is likely to cause further damage. The order was signed by judge Phaibun Thongnuam.

Chiratchaya was then taken to the Women’s Central Correctional Institution, where she is now detained.

This is the second time Chiratchaya has been charged with contempt of court. In August, Chiratchaya and another protester named Ngoentra Khamsaen were charged with contempt of court, defamation, and using a sound amplifier without permission for protesting in front of the South Bangkok Criminal Court to demand bail for detained activists, during which they gave speeches criticizing judges in the South Bangkok Criminal Court for denying bail to monarchy reform activists Nutthanit Duangmusit and Netiporn Sanesangkhom, who were detained pending trial on royal defamation charges at the time. Chiratchaya and Ngoentra were detained for 9 days before being granted bail.