The activist group Thalufah staged a protest in front of the police headquarters yesterday (24 November) to demand that the police take responsibility for the violent crackdown on the 18 November anti-government protest march, which left many protesters injured and cost one activist his eye. 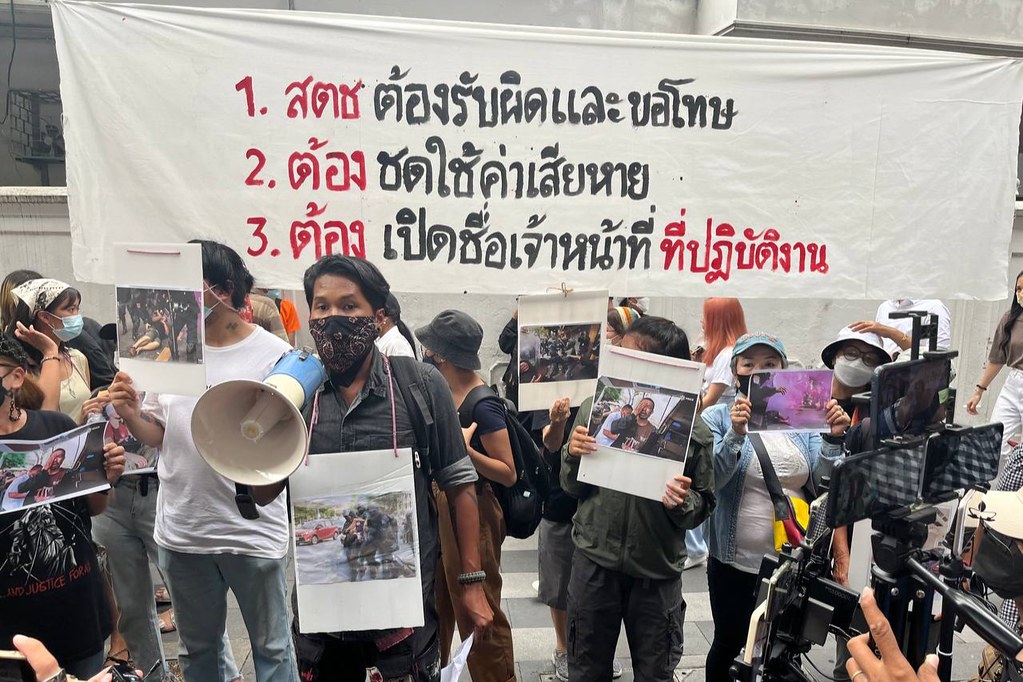 Protesters gathering in front of the police headquarters holding pictures of the crackdown and a large banner stating their demands. (Photo from Mob Data Thailand)

The activists demanded that the Thai police apologize for the violence and compensate the injured. They must also guarantee that no violence will be used in future to disperse protesters and must disclose the names of officers involved in operations.

On 18 November, crowd control police forcibly dispersed anti-government protesters gathering on Dinso Road for a march to the Queen Sirikit National Convention Centre, leaving many protesters injured, including Payu Boonsophon, an activist from the Dao Din group, who was shot in his right eye with a rubber bullet. 25 people were arrested.

At least 4 members of the press were also injured. Several were hit by crowd control police shields and batons, one was assaulted a group of crowd control officers while livestreaming the protest, and a photographer was hit in the head with a fragment of a glass bottle thrown from behind the police lines. A citizen journalist was also assaulted and arrested. 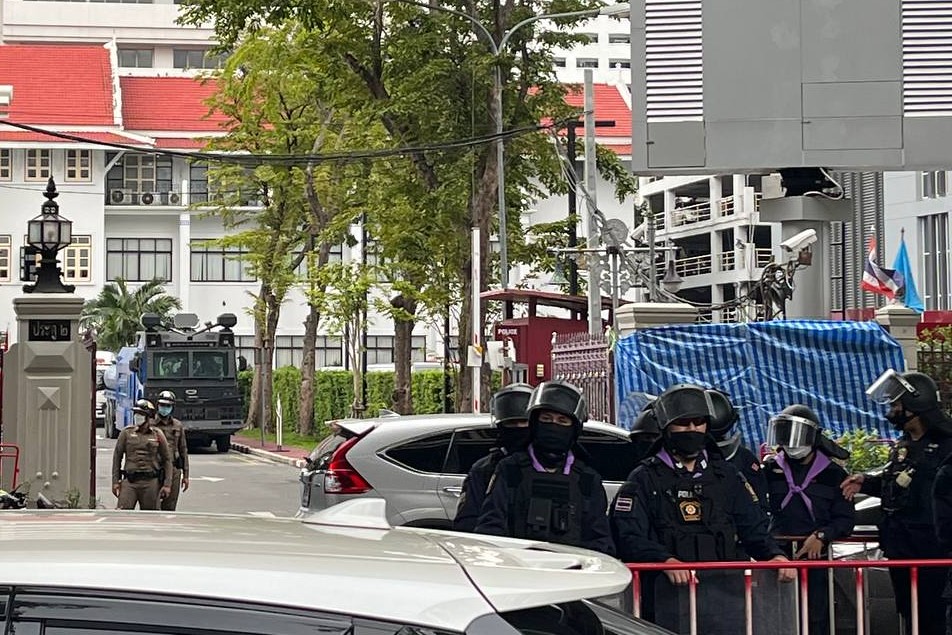 Crowd control police in riot gears stationed on the traffic island in front of the police headquarters, while a water cannon truck was parked inside. (Photo from Mob Data Thailand)

Ahead of the protest, which took place yesterday (24 November) at 15.00, units of crowd control police were seen stationed inside the police headquarters on Rama 1 Road along with a water cannon truck. Police officers were stationed on the skywalk linking the BTS Sky Train’s Siam and Chidlom stations, which were closed ahead of and during the protest, while a police checkpoint was set up at Chaloem Phao intersection. Crowd control police carrying shields were also stationed on the traffic island in front of the police headquarters.

While activists took turn giving speeches in front of the police headquarters, activist Jatupat Boonpattararaksa and some other Thalufah members went to meet with senior police officers. They then returned with Assistant Police Commissioner Pol Lt Gen Sarawut Karnpanich. Jatupat said that the activists were told by Pol Lt Gen Sarawut that a committee will be formed to consider whether protesters injured during the crackdown will be compensated, and that the police will consider the demand to disclose the identity of all officers involved in an operation and will reply in 15 days.

Pol Lt Gen Sarawut said that he had informed the Police Commissioner of the demand for compensation and that the protesters may sue the police for damages. He also noted that the police and activists will need to discuss how to prevent future violence. He admitted that anonymity may lead to officers becoming more violent, and said that the public has a right to know the name and division of officers involved in an operation so they can be held accountable and so that charges may be pressed against them if needed. 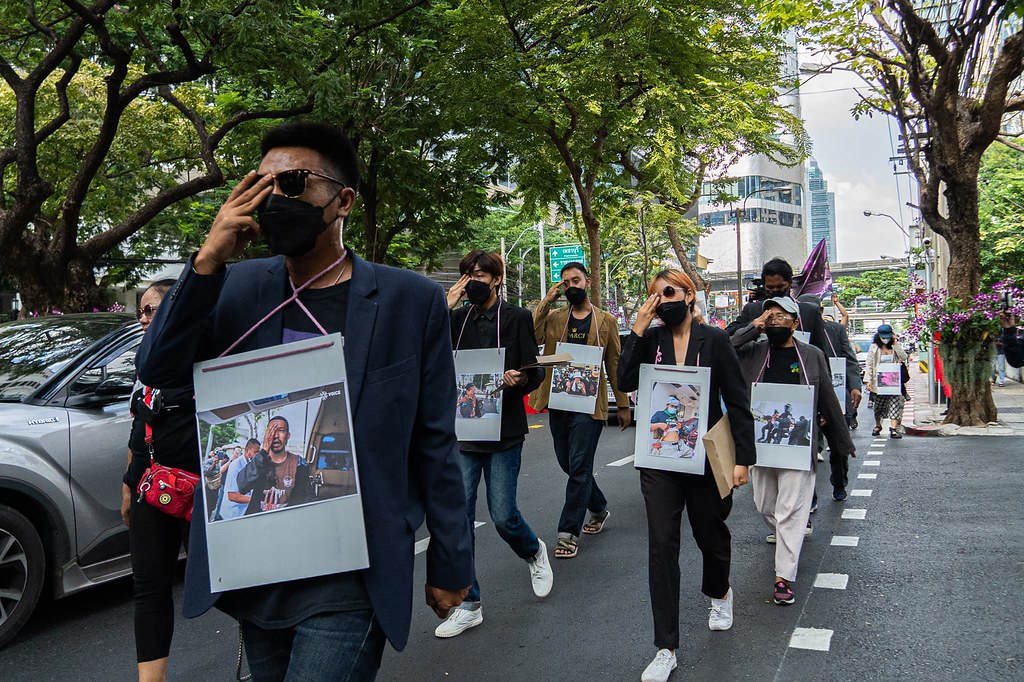 Thalufah also on Tuesday (22 November) visited 6 embassies in Bangkok and the UN headquarters to file petitions on the excessive use of violence to disperse protesters. At around 13.50, Jatupat led the activists in a march down Wireless Road while covering his right eye with three fingers to show support for Payu, who has lost his right eye. Other activists displayed pictures of the crackdown.

The group visited the embassies of Vietnam, the US, Japan, Mexico, Germany, and Singapore, before travelling to the UN headquarters on Ratchadamnoen Nok Road, where Jatupat and another activist went in to file their petition.

Meanwhile, members of the People’s Movement for a Just Society (P-Move) in at least 9 provinces on Wednesday (23 November) filed petitions with their provincial governors calling for Prime Minister Gen Prayut Chan-o-cha to resign so that he cannot interfere in the investigation into the crackdown. They also demanded that all officers involved in the crackdown, whether commanders or subordinates, be held legally responsible for the use of violence, and that everyone injured during the crackdown must be compensated.