25 people were arrested on Friday (18 November) after crowd control police forcibly dispersed protesters marching to the Queen Sirikit National Convention Centre (QSNCC), the venue of the APEC Economic Leaders’ Meeting, to protest the government under Gen Prayut Chan-o-cha and its pro-corporation economic models. 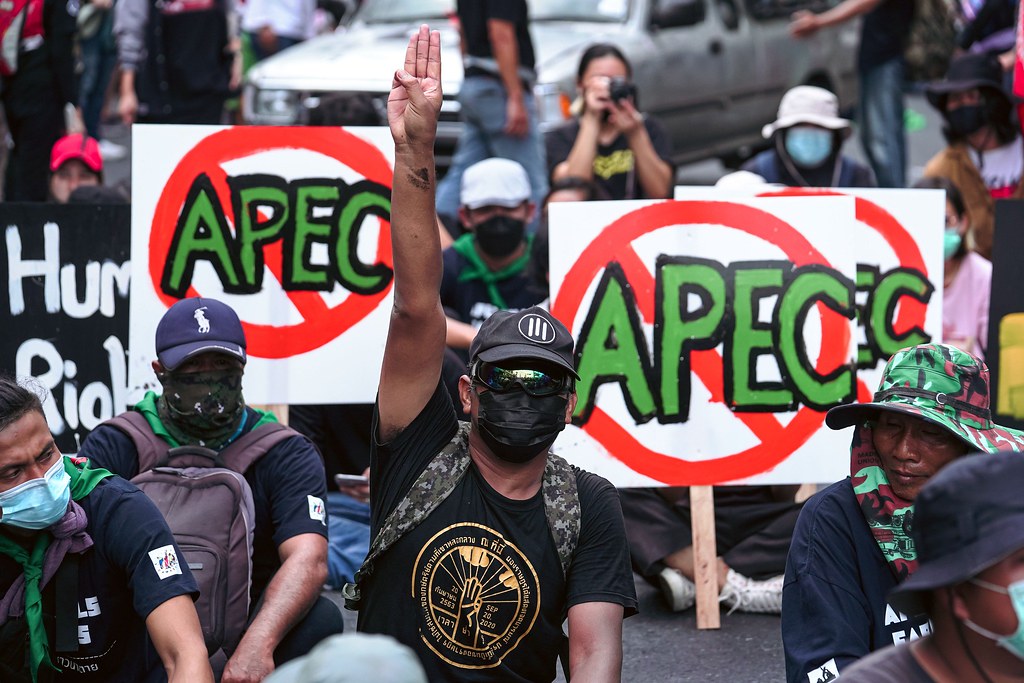 A protester flashed the three-finger salute, a well-reocgnised symbol of resistance in Thailand, while sitting on Dinso Road. (Photo by Ginger Cat)

Protesters and activists had been gathering at Lan Khon Muang square in front of the Bangkok City Hall since Wednesday (16 November) to protest what they see at the Thai government’s attempt to boost its legitimacy on the international stage and the lack of participation from civil society in determining policies being proposed at APEC meetings. They also spoke out against the Bio-Circular-Green Economy Model (BCG), raising concerns that the model would worsen community right issues facing marginalized and vulnerable groups, would take away their resources and land, and is an attempt at greenwashing the country’s major corporations with its carbon credit model.

During the two days of protests, activists spoke about various political and social issues, from freedom of expression and the royal defamation law to land rights, food security, community rights, and environmental justice. The events were organized by a network of activist groups and civil society organizations, including the Assembly of the Poor, the Northern Peasant Federation, the Chana Rak Thin Network, Neo Lanna and Thalufah. 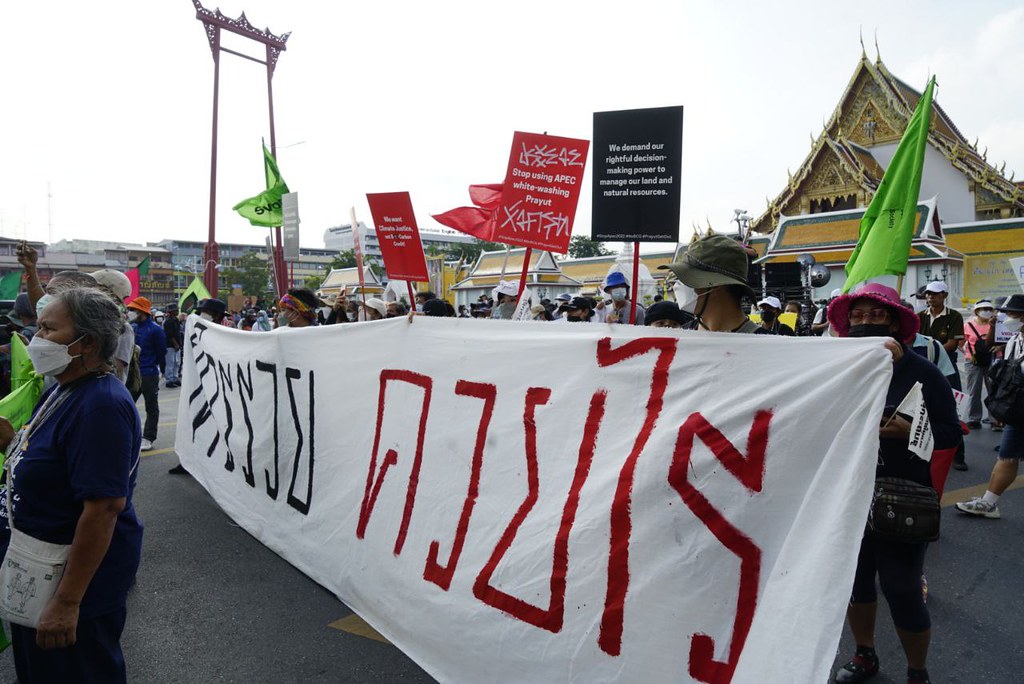 On Friday morning (18 November), the protesters began marching from Lan Khon Muang to the QSNCC. However, they were blocked by a series of police barriers. As they were approaching the Democracy Monument via Dinso Road, they found that the road was blocked by rows of crowd control police in full riot gear and two police trucks. Protest leaders attempted to negotiate with the police, but were not successful.

At 10.10, after protesters tied a rope to the axle of one of the police trucks and pulled it out of the road, crowd control police rushed out from behind the blockade, pushing protestors with shields. Rubber bullets were also fired, and two rubber bullet casings were found on the ground at the site of the clash.

Thai Lawyers for Human Rights (TLHR) reported at around 12.10 that at least 10 people were arrested and taken to Thung Song Hong Police Station, despite the protest taking place outside its jurisdiction. 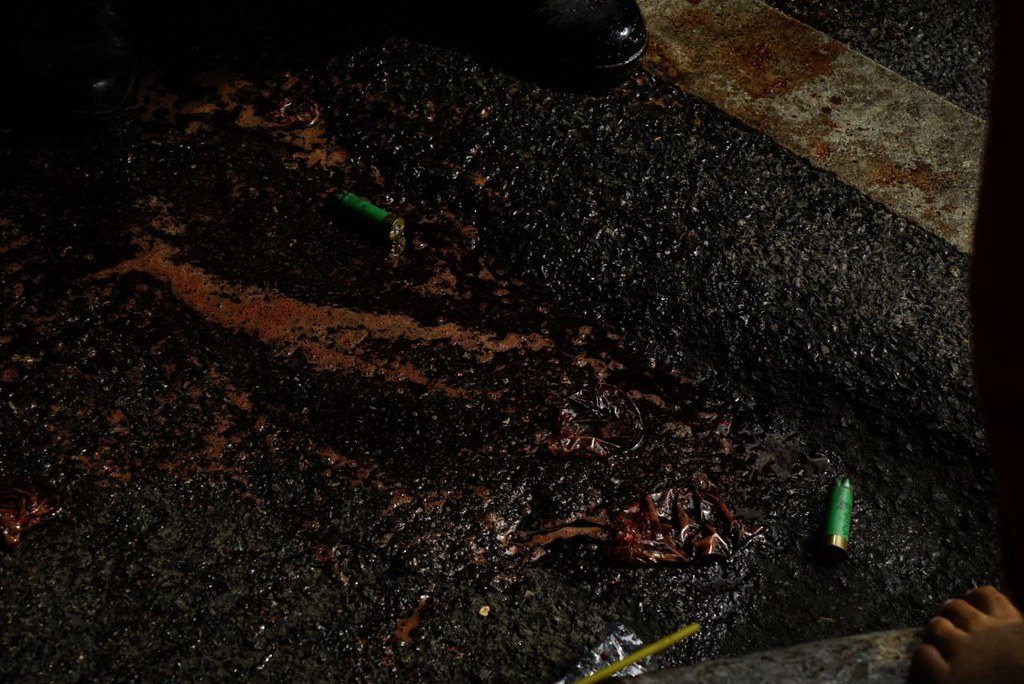 Two rubber bullet casings were found on the ground after the clash at 10.10

After the clash, pro-democracy activist Patsaravalee Tanakitvibulpon said that the police need to explain why they fired rubber bullets at unarmed protesters at close range and after protest leaders tried negotiating with them.

"What happened under the Prayut Chan-o-cha government is that the police officers have no spine and chose to use violence against unarmed people," she said.

Patsaravalee condemned the police and Gen Prayut Chan-o-cha as Prime Minister, and called on the international community to send observers to the protest site.

"We would like to send a message to every country. Please send representatives to observe this location, so that you see the reality of what is happening, what the police are doing to people speaking out about their livelihood and about resources," she said.

Patsaravalee called on the public to pay attention to issues regarding resources, and demanded the release of all arrested protesters. 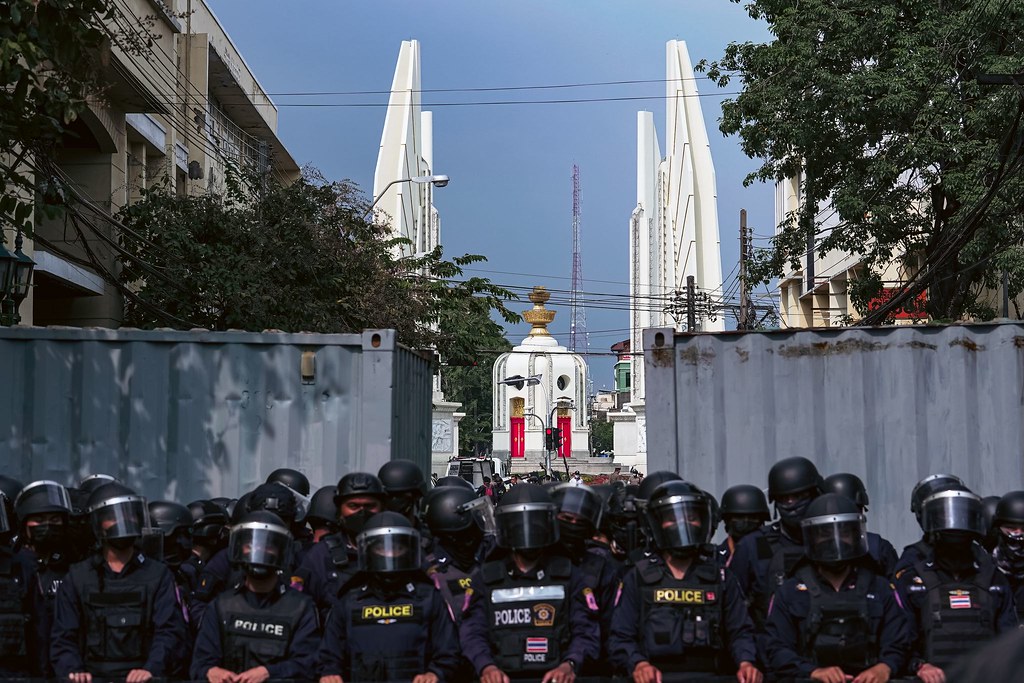 Protesters are now staying on Dinso Road while activists take turns giving speeches on a speaker truck, but said they will not return to the Lan Khon Muang square in front of the Bangkok City Hall since they have a petition to file with APEC leaders, while the police repeatedly order them to return to Lan Khon Muang and threaten them with prosecution.

At around 12.30, several protesters performed a traditional cursing ritual by burning chilli and salt and placed the stove on a police truck. The police then brought out a fire extinguisher to put out the flame. At around 12.35, crowd control police pushed into the protesters, many of whom were resting and having lunch. Shots were continuously heard. 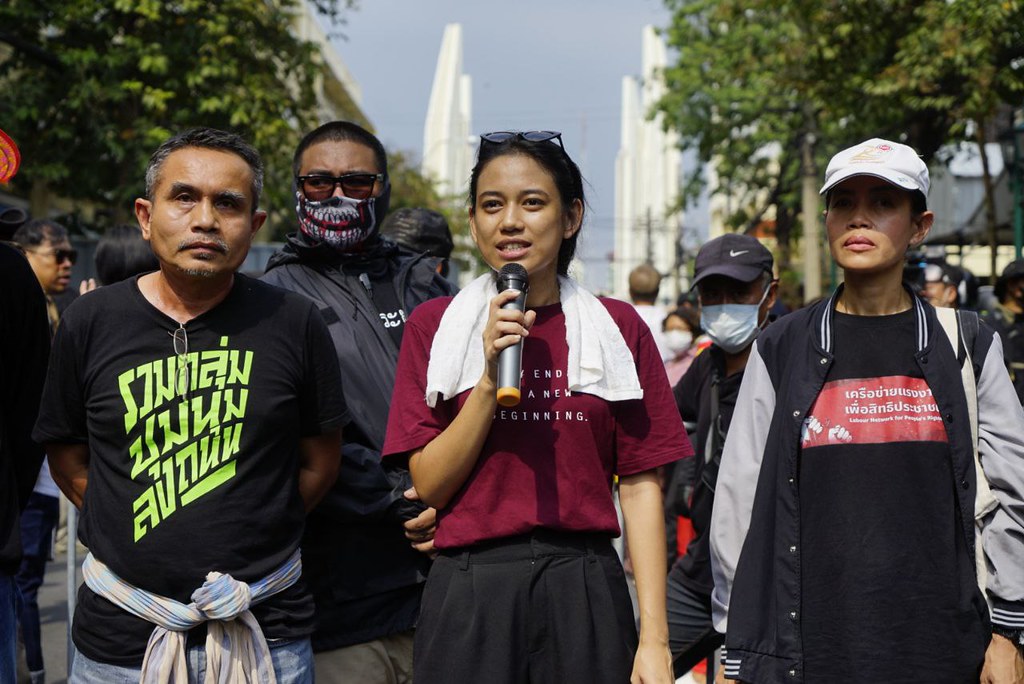 At 13.30, activist Patsaravalee Tanakitvibulpon said that the injuries sustained by protesters and members of the press show that police commanders are not able to control their own subordinates. She called on the police to take responsibility and to explain why they fired rubber bullets at unarmed protesters.

Patsaravalee said that they would not end the protest and would not leave until everyone arrested is released, and until they are told where those arrested have been taken and where the injured are being treated. She also asked whether the world leaders attending the APEC meeting would still accept the policies proposed by a government that harms its own people.

At 14.45, TLHR said that 25 people were arrested and taken to Thung Song Hong Police Station. Meanwhile, Patsaravalee announced that the protest would move to the police station to demand the release of the arrested protesters and that they will not leave until everyone is released without charge. The protest database and observation site Mob Data Thailand also reported that at least 33 people were injured throughout the day. 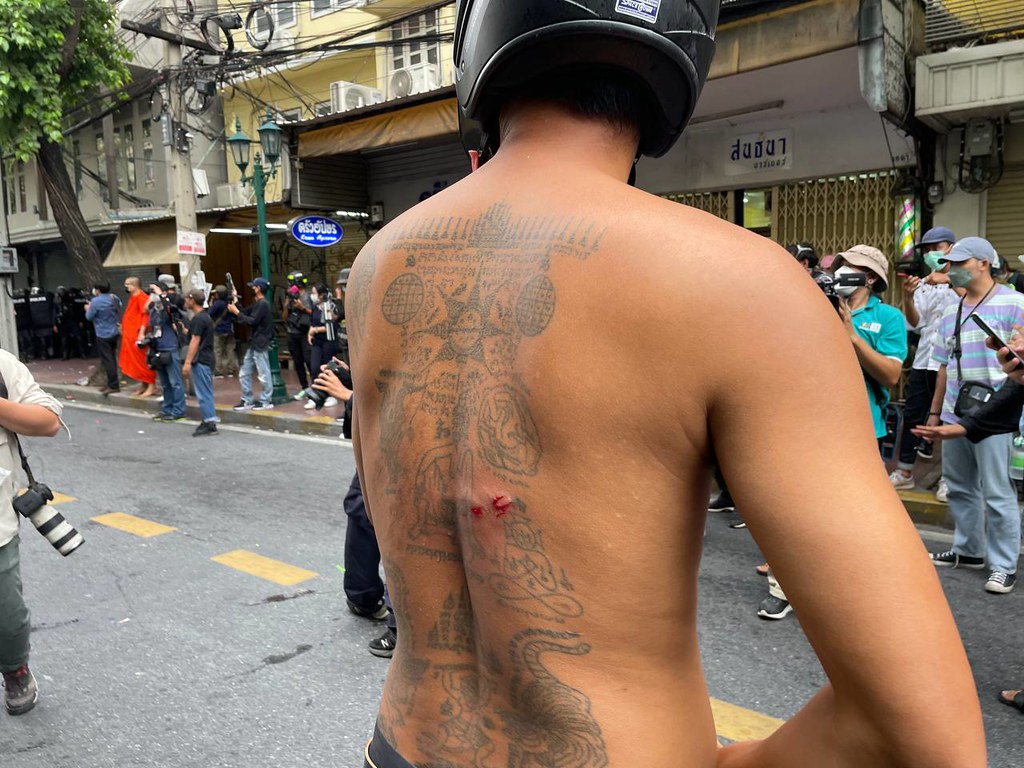 Among the arrested was Worawan Sae-aung, or Auntie Pao, an elderly regular protest-goer popular with younger activists, who was arrested at around 9.30, before the first clash. Worawan was arrested after she was pulled behind the police lines and taken away in a police detention truck, prompting protesters to immediately demand her release.

During the second clash at 12.45, the Assembly of the Poor’s Baramee Chaiyarat and the NGO Coordinating Committee on Development’s Jekapan Phrommongkon were also arrested. Both were previously seen using a speaker truck to call for the police to open up the road to let them keep marching, and were heard giving instructions to protest guards.

From around 16.00 onwards, protesters gathered in front of Thung Song Hong Police Station to demand the unconditional release of the arrested protesters.

While protesters gathered at the police station, activist Lertsak Khamkongsak gave a speech alleging that the protest leaders were asked to have the protesters move 50 metres closer to the Bangkok City Hall because a royal motorcade was to go through Ratchadamneon Road, and speculating that this is why crowd control police became more violent towards the protesters.

He also noted that the police violated the Public Assembly Act, since they are required to request a court order to use crowd control weapons, such as tear gas, batons, rubber bullets, or water cannons, but did not do so.

Lertsak said that it would have been possible to plan for the motorcade. The protesters could have sat down when the motorcade went past, or the police could have lined up around them to block them from view without asking them to move, as that is what happened during an anti-NPO bill protest in May. He asked why they were now being asked to move, and said that there is no other reason why their protest would be so violently dispersed other than the royal motorcade.

In May 2022, activists and members of civil society organizations gathered in front of the UN headquarters on Ratchadamneon Nok Road to protest the new non-profit organization (NPO) bill due to concerns that the bill would be use to restrict freedom of association in Thailand. After protesters refused to move to another location as royal motorcades were passing through Ratchadamneon Nok Road on the way to and from Thammasat Univeristy’s Tha Prachan campus for for the university’s graduation ceremony, hundreds of police officers lined up along the street to block the protesters from view as the royal motorcade went by, and the protesters were not forcibly dispersed. 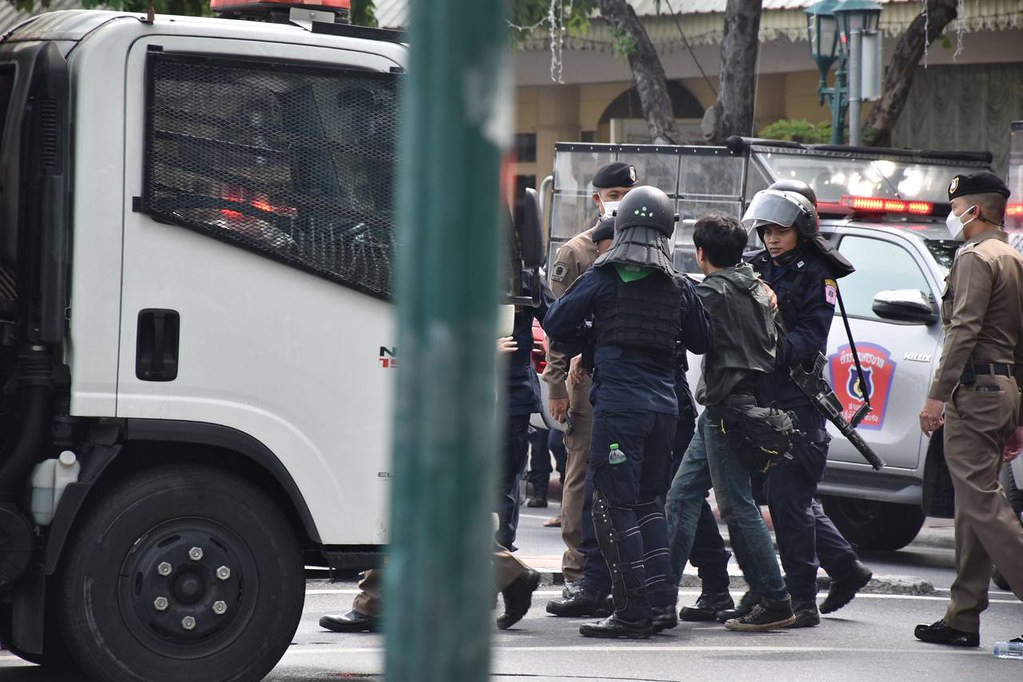 A protester being marched into a police detention truck

TLHR reported at around 21.15 on Friday night (17 November) that the 25 arrested protesters were charged with participating in a gathering of 10 or more people and causing a breach of public peace by an act of violence or by threatening violence, and not dispersing when ordered to do so by an official. They were also charged with not complying with an officer’s order given under the Public Assembly Act.

Payu Boonsopon, an activist from the Dao Din group, will also be charged, but since he was undergoing surgery after being shot in his right eye with a rubber bullet, he will meet the inquiry officer to hear the charges and give his testimony once his condition improves.

25-year-old Wittaya (last name withheld), who was also arrested, was given an additional charge of violating the Public Assembly Act and the Public Cleanliness Act, after he was accused of pouring water mixed with cement onto the street in front of the main office of the Siam Cement Group (SCG) and spray-painting “No APEC” on the street during a protest against the BCG model.

The protest was organized by the Chiang Mai-based activist group Neo Lanna, during which activists poured water mixed with cement onto a model of the Democracy Monument and spraying painting messages onto the street. They then shouted “Stop monopoly. Prayut get out,” while others held up a banner saying “No BCG, no free trade area, tax the rich.” 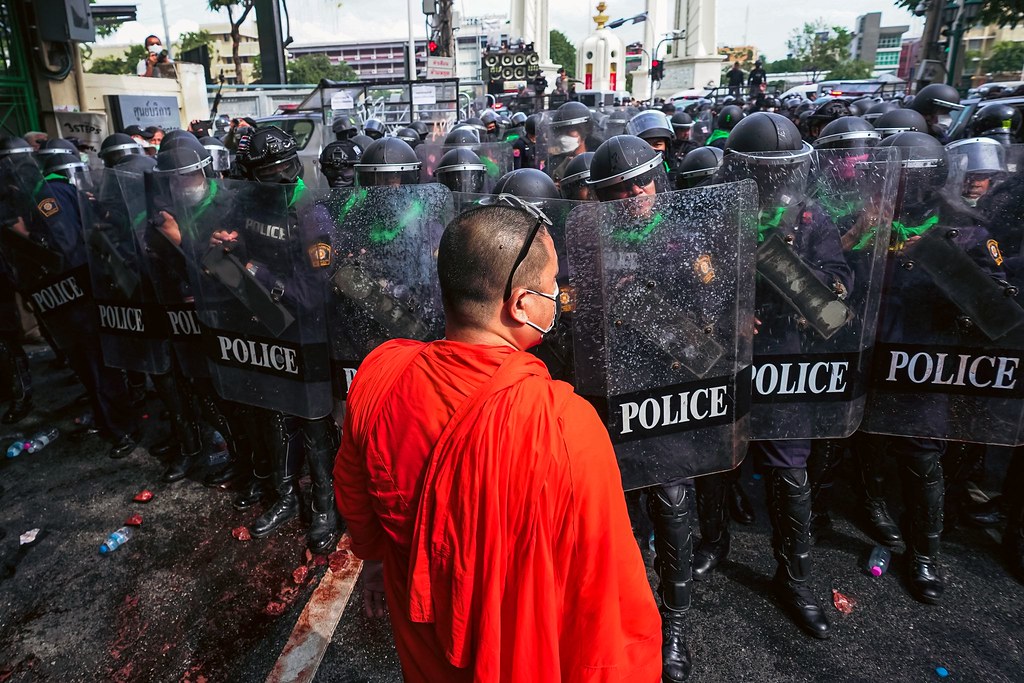 All were granted bail on a security of 20,000 baht each, covered by the Will of the People Fund, a bail fund for pro-democracy protesters and activists. They were also given the conditions that they must not join any political demonstration or invite people to join any gathering that may cause public disorder.

TLHR noted that 13 of the 25 arrested protesters were injured. Some show signs of being assaulted by crowd control officers, such as Wittaya, who has several cuts and bruises on his back, and Palathip, who was shot with a rubber bullet in his right arm and hit with batons, resulting in cuts and bruises on his body and his head, as well as a broken tooth.

Yupa, an elderly woman who was among one of the first protesters arrested, had a cut on her forehead above the left eyebrow, and needed stitches. Meanwhile, Waranyu Khongsathittum, a citizen journalist livestreaming for The Isaan Record, was assaulted by crowd control officers before being arrested. He had a cut on his head and several bruises and cuts on his body, and his glasses were broken. TLHR also said that Waranyu was made to wait 2 hours before hew as taken to a hospital for treatment.