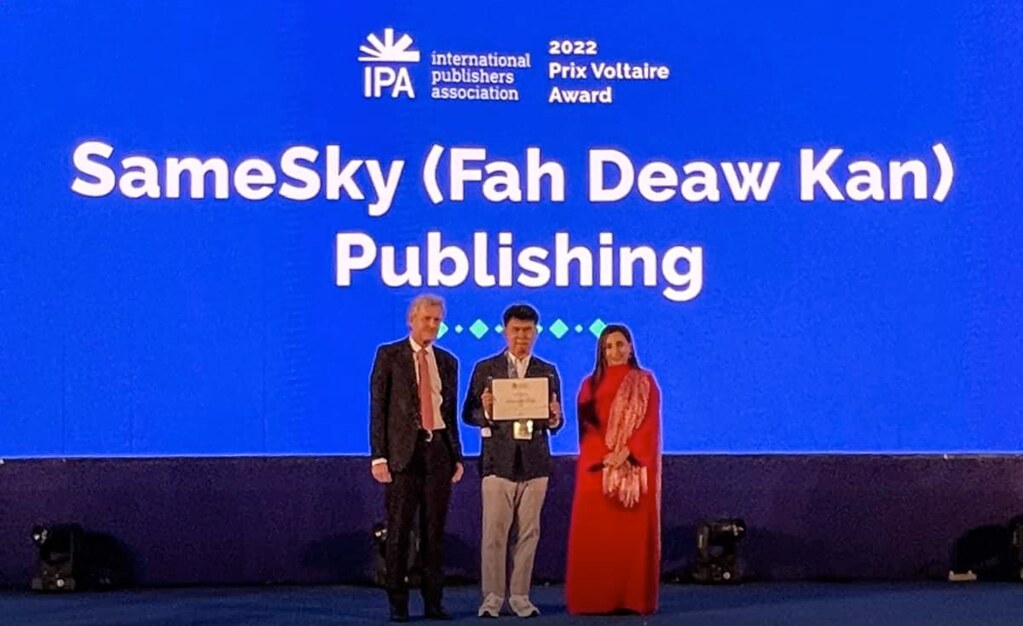 The Bangkok-based publisher of books on politics and the social sciences was selected from a short list of five. Other nominees included publishers from India, Guatemala, Afghanistan, and Ukraine, all of whom have been recognized “for their exemplary courage in upholding the freedom to publish and enabling others to exercise their right to freedom of expression.”

Kristenn Einarsson, chair of the IPA’s Freedom to Publish Committee, said that Same Sky Books is a “perfect example of a publisher demonstrating their bravery by standing up to intimidation and continuing to publish works they believe in.” The IPA also noted the Thai authorities are attempting to persecute Same Sky Books’ executive editor Thanapol Eawsakul for sedition.

On 11 November, Thanapol attended the awards ceremony, which took place at the 33rd International Publishers Congress in Jakarta, Indonesia. In his acceptance speech, Thanapol noted that he believes Same Sky Books won the award only because of “an abnormal situation” in Thailand and said that he wanted to inform the international publishing community of what is happening in the country.

Thanapol said that since issues relating to the monarchy have been seen as “the elephant in the room,” one of Same Sky Books’ missions has been to publish critical studies on the monarchy, as well as raise questions about other social phenomenon in the country. He referred to the 2 most recent military coups as destructive to the Thai media, and noted that coups have been used as a way of changing governments.

Since orders issued by coup leaders are treated as law in Thailand as long as they are not explicitly repealed, Thanapol said that orders made by the NCPO gave the monarchy its power and assets and returned it to its status before the 1932 revolution, leading to what is referred to as a pseudo-absolute monarchy. He said that Same Sky Books is fully aware that the monarchy and its network are also a political issue in Thailand, and publishes books to educate people on issues relating to the monarchy.

He noted that the pro-democracy movement, which started in 2020, not only directed their demands at the government under Gen Prayut Chan-o-cha, but also at the monarchy, which they see as the centre of the problems facing the country. Young people also began to question the historical narrative they have been taught, which he said led to a sudden rise in interest in books published by Same Sky, in turn leading to increased efforts by the authorities to harass and persecute them. The Same Sky Books office has been raided, and books have been confiscated by the authorities claiming to be checking whether anything defames the monarchy, while Thanapol is facing several defamation charges for expressing his opinion.

He thanked the IPA for the award, saying that it is “an honour and encouragement for us to walk further down this road, because at least it is a clear indicator that we do not walk alone.”