The current protests in Iran have drawn attention to the regime’s attempts at creating a system of mass surveillance and information control similar to that of its authoritarian allies. 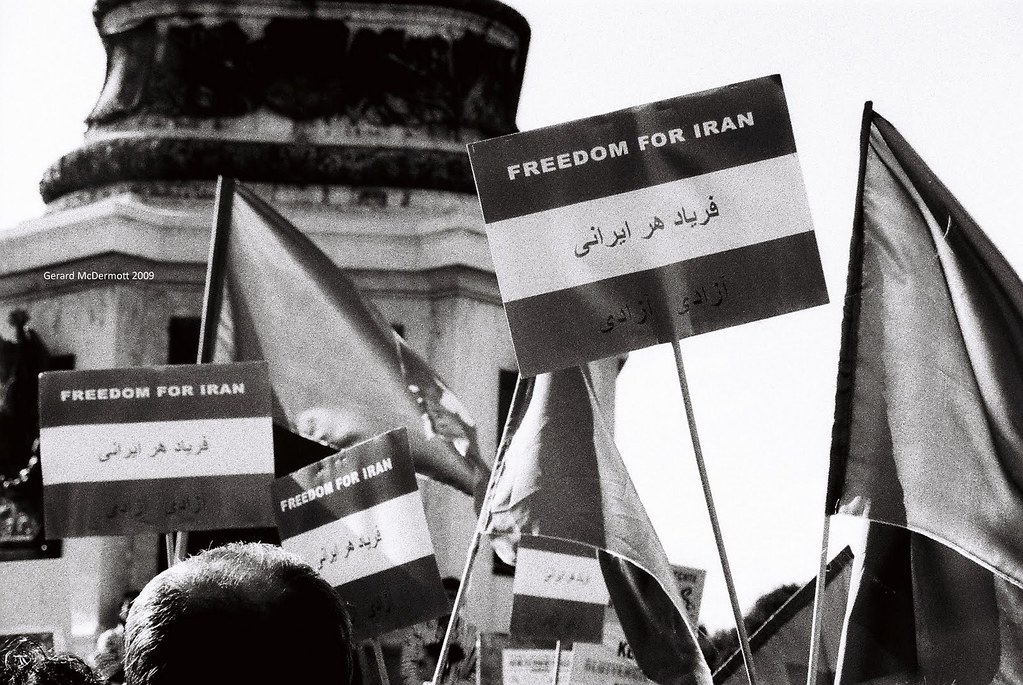 Demonstrators gather at Heldenplatz in Vienna, Austria to express dissatisfaction at the outcome of Iran's flawed elections in June 2009. Credit: Gerard McDermott, all rights reserved

On 16 September 2022, Mahsa Amini, a 22-year-old Kurdish-Iranian woman, died in the custody of the Islamic Republic’s ‘guidance patrol’ or ‘morality police’ in Tehran. Amini had been detained for allegedly violating the state’s Islamic dress code. Her death has led to protests across the country that have now lasted for more than forty days. The government has responded by carrying out a brutal crackdown on protesters, which by late October had led to the arrest of nearly 12,500 people in addition to over 250 deaths, according to some sources. Protests against the regime had previously taken place in 2009, 2017/2018, and 2019, yet this new protest movement is mainly made up of young women and those under the age of twenty-five and has exhibited a ferocity not seen before among the country’s population. It has been argued by some that the current protests are large enough to overthrow the theocratic regime that has ruled the country since 1979. The current protests have also drawn attention to the Islamic Republic’s growing capabilities in the fields of surveillance and information control. The regime has made significant progress toward developing its own ‘national internet’ or ‘halal internet’ over the last two decades.

In February of this year, the government announced the introduction of a ‘User Protection Bill’, a repressive piece of legislation that would curb access to the internet across the country and undermine the digital rights of Iran’s netizens. One of the provisions of the bill states that if a platform refuses to cooperate with the authorities concerning requests made related to content, the regime’s Committee Charged with Determining Offensive Content (CCDOC) can decide to completely ban the platform in question without notice. Another provision states that platforms that do not cooperate with demands made by the government will be punished with bandwidth throttling. Throttling has been used by the regime in the past, yet it has never been an official part of government policy.

Arguably, the most significant provision of this new bill is that it puts the country’s internet gateways and other infrastructure under the direct control of Iran’s military and security agencies, which provides them with powerful tools for blocking websites and apps, spying on critics of the regime, carrying out internet shutdowns, and throttling bandwidth. The bill was criticised by Human Rights Watch and more than fifty other NGOs as the internet is one of the few ways that organisations outside of Iran can collect information about human rights abuses and other forms of oppression taking place within the country.

Iran has received assistance from China, one of the state sponsors of digital authoritarianism, in developing its new system of surveillance and information control. China, which is now Iran’s largest trading partner, has been instrumental in the development of the Islamic republic’s surveillance and censorship capabilities. In early 2012, the Shenzhen based-company ZTE Corp, signed a deal to provide the regime in Iran with technology for finding the location of smartphone users, and intercepting their phone calls, text messages, emails, and also communications from messaging apps. ZTE cooperated with TCI, a semi-private company with ties to the Islamic Revolutionary Guards Corps (IRGC), Iran’s elite special-forces unit that is known to be close to the regime’s top clerics. In June of this year, it was reported that another Chinese firm, Tiandy, which manufactures CCTV and other surveillance technologies, is believed to have sold its products to the police in Iran, and also to the IRGC, which is currently running suppressive security operations across the country. Overall, these sales of technology related to surveillance and data acquisition are part of a greater scheme of cooperation between China and the Islamic Republic. Cooperation between Russia and Iran has also blossomed in recent years, with Russia’s use of Iranian drones in Ukraine receiving substantial media coverage in recent weeks. Over the last eighteen months, the two states have also worked together on launching and operating a satellite designed for surveillance purposes. It has been assumed by many analysts that Russia is involved in supporting the regime with the development of its ‘national internet’. 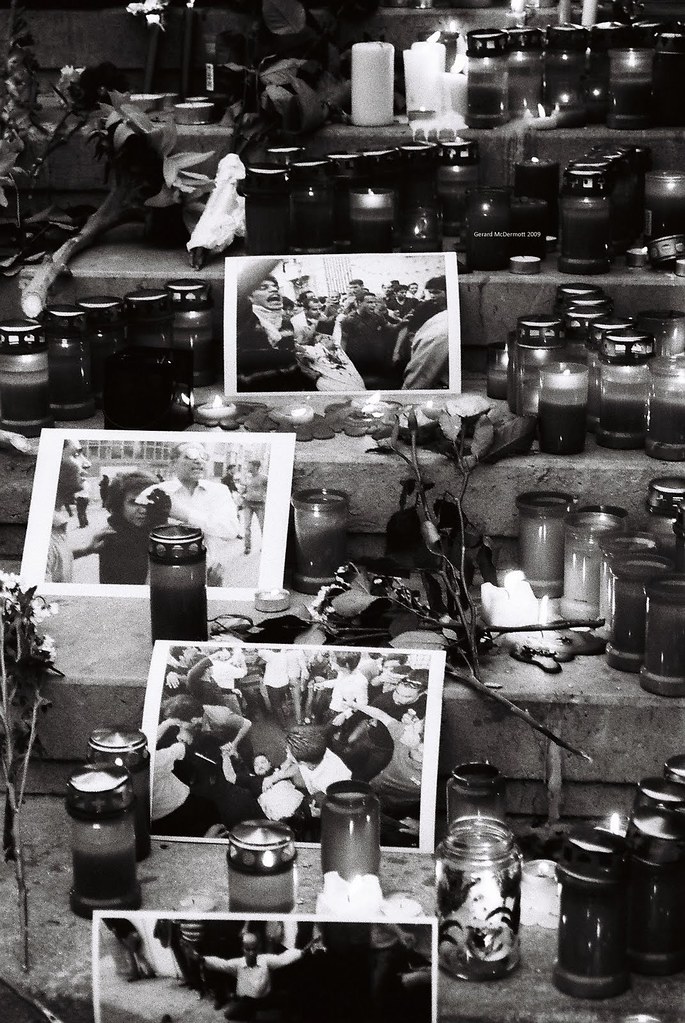 Candles lit and photographs of victims displayed outside of Austria's parliament at an Iranian pro-democracy demonstration in Vienna, Austria in June 2009. (Gerard McDermott, all rights reserved)

The security forces of the Islamic Republic have proven themselves to be adept at misinformation campaigns against foreign audiences, as outlined in a report by Citizen Lab from 2019, which described a ‘sprawling disinformation assembly line’ supported by the regime that has been in existence since at least 2016. Another area of digital prowess for the regime has been the blocking of popular websites and messaging apps. This has been taking place since the mid-2000s. Facebook was blocked in Iran after widespread anti-regime protests took place in 2009. In 2018, the government banned more messaging and networking apps after renewed anti-government protests. Effectively, all well-known and widely-used apps that originated in western states have been banned in Iran. However, as the regime has become gradually more sophisticated in its attempts to dominate the digital realm, dissenting Iranians have also become more tech savvy, using Psiphon, Lantern, and Tor to circumvent the restrictions created by the regime. The regime has attempted to launch its own messaging app, Soroush, yet the app has not enjoyed much success within the country as it is monitored and controlled by the regime.

Internet shutdowns, both complete and partial, are another tool of the regime for quieting dissent and undermining protests and demonstrations. 2018 saw the largest anti-government protests since 2009, which  led to an increase in internet shutdowns by the authorities. In 2021, after protests broke out in Khuzestan province, the regime cut off the internet in all of the main cities in the province and reduced bandwidth in other parts of the province. Since the outbreak of large and widespread protests in September of this year, nearly all of Iran’s population have experienced some form of restriction to their use of the internet. Internet shutdowns have been prolonged and have caused major disruption within the country. As a response to the regime, Signal have taken an active interest in maintaining access to their app within Iran and Starlink has also become accessible within the country, although with many limitations.

The surveillance and data acquisition capabilities of the state have also evolved significantly since the late-2010s. In September of this year, it was announced that the regime would introduce AI-powered facial recognition technology into the operating systems of the ministries of the state. Mohammad Saleh Hashemi Golpayegani, Direcrtor of Iran’s Headquarters for the Promotion of Virtue and the Prevention of Vice, announced that facial recognition technology would be used to identify women who failed to follow regulations concerning the wearing of hijabs. This worrying development is part of a greater policy that has been introduced by the regime aimed at increasing the use of AI technology for surveillance. These new techniques augment an already powerful and complex system of state surveillance that has been in place since the 1980s. The government has found ways around sanctions imposed by the West and have been able to acquire advanced surveillance technologies from China, a number of European states, Israel, and also Blue Coat systems, a private surveillance firm owned by Symantec, based in California.

It has been estimated by many that the current protests enjoy a base of support broad enough to overthrow the regime. However, this is not the first time that Iran has experienced widespread protests in recent years and considering how the regime has long been targeted by the US for ‘regime change’ and by Iranian diaspora groups based in Europe and North America, it is not known exactly how widespread and popular the current protests are and how accurate foreign media coverage of the protests has been. What is certain is that the protests have lasted for more than forty days and have spread widely across the country from the Kurdish region in the northwest where they originated. Yet overall, it is neither clear what level of support the regime enjoys nor what percentage of the population is actively supporting the protests.

As discussed above, the Islamic Republic has evolved into a sophisticated surveillance state, with advanced capabilities in terms of surveillance, data acquisition, censorship, and information control. Iran may be isolated by the West, yet it maintains strong ties with both Russia and China. It is difficult to predict what forms of support Iran might receive from its allies in what appears to be an emerging neo-authoritarian bloc in the shape of China, Russia, and Iran, among others.

Although the regime has shown itself to be sophisticated in the digital realm, it has also proven itself to be vulnerable to hackers. Iran’s authoritarian allies have also faced challenges concerning the development of their own national internet projects: Russia has recently learned that its own digital realm is not as secure as many had assumed and it has also been proven that activists who are tech-savvy can find ways around China’s ‘great firewall’. Thus, it remains to be seen how effective the Islamic Republic’s attempts at building a ‘national internet’ have so far been. The current uprising will be a test for the regime’s digital authoritarian capabilities.

Gerard McDermott is a PhD candidate at City University Hong Kong. He has previously published in The Kyoto Review of Southeast Asia, The Diplomat, Politico, and Peace Review. He is originally from the Republic of Ireland.