On Monday (31 October), family and friends gathered to celebrate what would have been the 37th birthday of activist Siam Theerawut, who has been missing for the past three years and whose fate remains unknown. 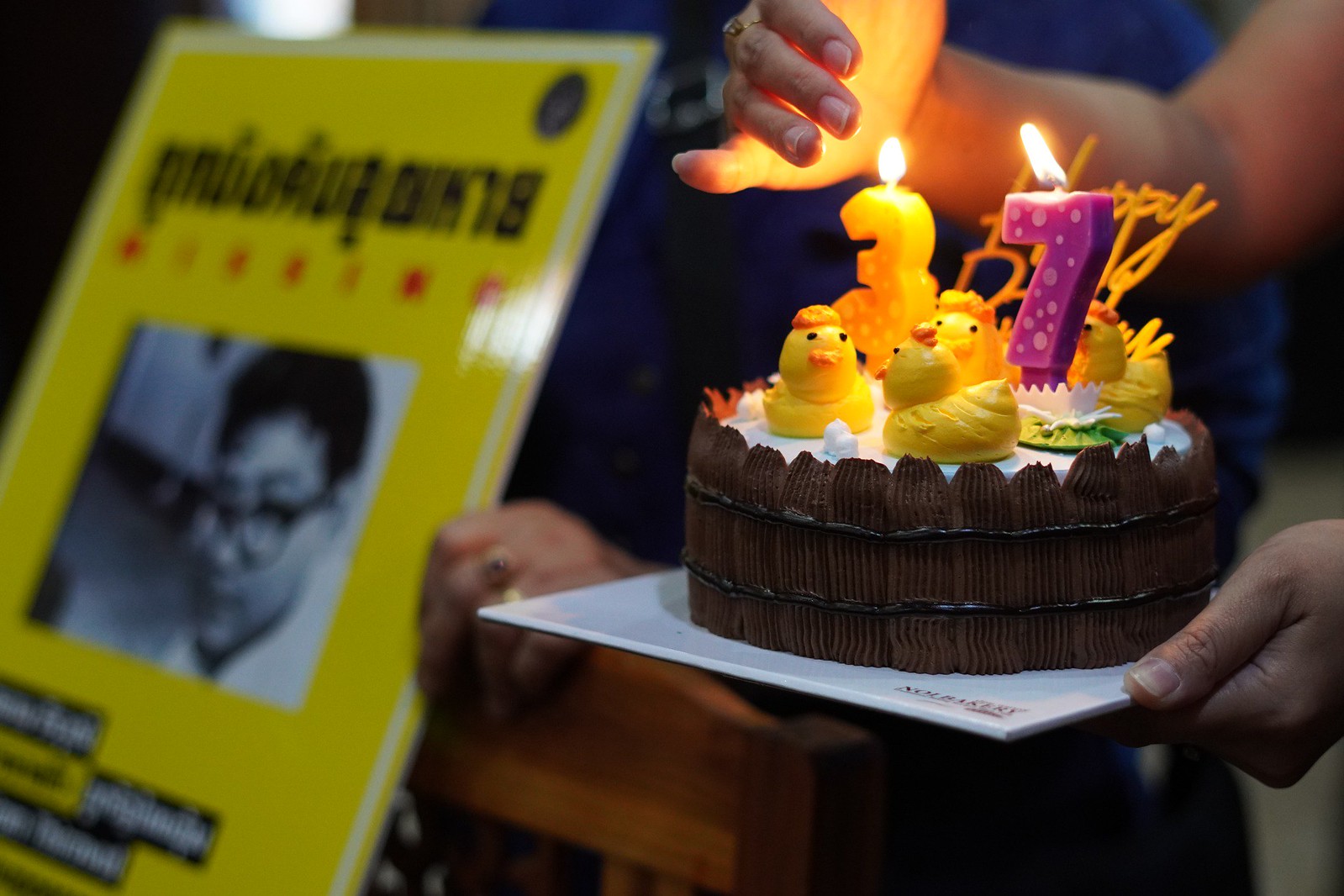 Siam was a member of the Prakaifai theatre group and was involved in “The Wolf Bride.” Many of those involved in staging the play were charged with royal defamation under Section 112 of the Thai Criminal Code. Pornthip Mankhong and Patiwat Saraiyaem, two other performers in the production, were charged and each spent two years in prison.

In 2018, Siam was accused of being a leading member of the Thai Federation and was charged with royal defamation. He fled the country after the 2014 military coup when all royal defamation cases were revived.

Siam went missing in May 2019, after he was reportedly arrested in Vietnam and extradited to Bangkok along with 2 other Thai activists in exile, Chucheep “Uncle Sanam Luang” Chiwasut and Kritsana Tubthai. They have not been heard from since.

Siam’s family continue to search for him, but investigation has been slow. In June 2021, Siam’s mother Kanya Theerawut and his sister Saranya Theerawut went to the Department of Special Investigation (DSI), along with Sitanun Satsaksit, whose brother Wanchalearm Satsaksit went missing while in exile in Cambodia, and their legal assistance team from Thai Lawyers for Human Rights (TLHR) and the Cross-Cultural Foundation (CrCF). However, they were told that there was no progress in the investigation into his disappearance.

In March 2022, Kanya said she was visited by two men, possibly plainclothes police, while she was home along with her 7-year-old granddaughter. The two men asked Kanya if Siam had come home and asked to enter the house without presenting IDs or a warrant, but Kanya refused, telling them that they need to bring a search warrant and that she would need to search them before they come inside the house to make sure they did not bring anything illegal with them.

The two men did not go inside the house, but asked to take a photo of Kanya, claiming they have been ordered to do so by their superiors. Kanya let them take a photo of her, and she also took photos of them and their vehicle.

On 4 April 2022, Kanya, Sitanun, and Sitanun’s lawyer Montana Duangprapa met with a representative of the Office of the UN High Commissioner for Human Rights (UNOHCHR) to ask the UNOHCHR to follow up with the Thai authorities on the investigations into the disappearances of Wanchalearm and Siam. They also called attention to charges filed against citizens for political expression and the harassment of members of Siam’s family and asked for updates on the process of adding Wanchalearm and Siam to list of victims of enforced disappearance of the Working Group on Enforced or Involuntary Disappearances (WGEID).

On Monday (31 October), the CrCF reported that Siam’s family and friends met in the morning for a merit-making ceremony, since it would have been his 37th birthday. A birthday gathering took place in the afternoon, during which poems were read out and family members blew out candles on a birthday cake.

The gathering was attended by Siam’s family and friends, and the families of activists Chatchan Bupphawan and Surachai Danwattananusorn, who went missing while in exile in Laos. Chatchan, or Phuchana, was later identified as one of the mutilated bodies found in the Mekhong River near Nakhon Pathom in December 2018. Surachai’s fate remains unknown.

The activist group 24 June Democracy also organised a presentation about 9 activists who went missing while in exile, and a panel discussion about enforced disappearances, which included as panellists Sirirot Thanikkun, who is set to run as a Move Forward Party MP candidate for Samut Prakan in the next general election, labour rights activist Sripai Nonsee, and CrCF legal advisor Somchai Homlaor.

The panellists spoke about enforced disappearance, transitional justice, related international and local laws, and the Prevention and Suppression of Torture and Enforced Disappearance Act, which was published in the Royal Gazette on 24 October 2022 and will come into effect in 120 days. They noted that it has been three years since Siam went missing, and his family, friends, and the rest of society are still not able to learn the truth about his disappearance. They also said that legislation alone may not grant justice to families of victims of enforced disappearance, but the public must also be aware of the issue and support human rights, while the justice system must show that it truly intends to find out the truth, compensate the victims, and punish the perpetrators.