A group of activists in Nakhon Ratchasima were detained by police on Wednesday night (19 October) after they stood next to the road holding a protest sign while a royal motorcade went past. 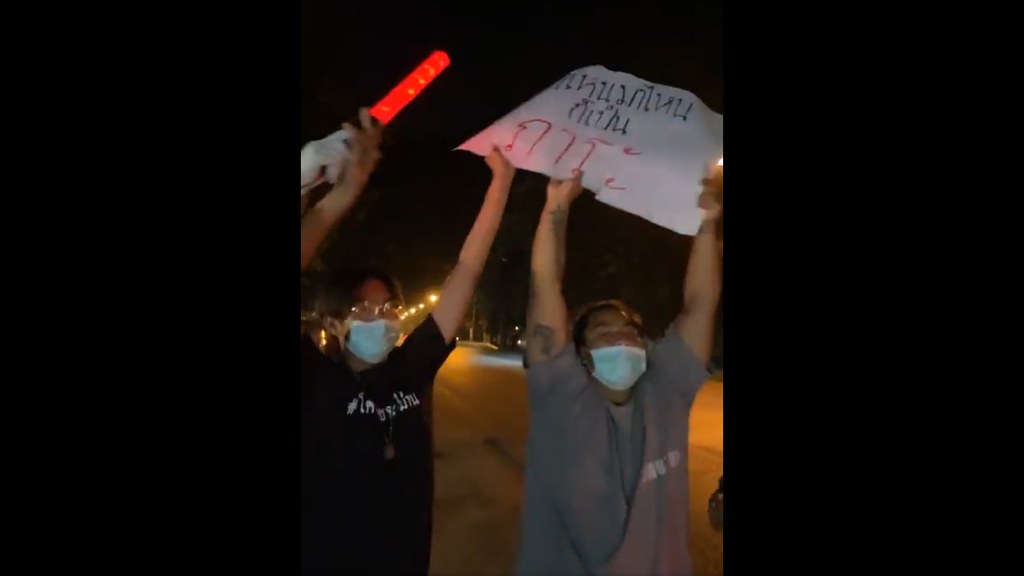 Two activists holding a sign saying “Going anywhere is a burden” next to a road along the route of a royal motorcade.

At around 20.00 on Wednesday (19 October), KoratMovement, an activist group based in Nakhon Ratchasima, went live on their Facebook page while three activists stood on the side of Sueb Siri Road in Nakhon Ratchasima, along the route of a royal motorcade, while holding up a sign saying “Going anywhere is a burden”. They were then surrounded by plainclothes and uniformed police officers, who tried to seize the sign from them.

The activists were not immediately detained as the royal motorcade passed, but as they were leaving the area and were explaining their action on the live broadcast, two plainclothes officers followed them before approaching them and telling them to get out of the road. The officers also demanded the activists show them the message on the sign and told them that it was inappropriate to display the sign during a royal motorcade, even though the activists said they were exercising their constitutional rights.

The officers also asked the three activists to present their ID cards, but one said they did not have their ID card with them. This led to a fine of 100 baht for not carrying identification. The group was released at 21.00 without other charges.

Last week, a man was arrested at the Queen Sirikit National Convention Centre for refusing to sit down and shouting “Going anywhere is a burden” as a royal motorcade of King Vajiralongkorn and Queen Suthida went past. He was charged with royal defamation and resisting officers.