A week has passed since the Northeastern massacre that left 37 dead. In the wake of the heartbreaking carnage, authorities and the media have begun to reflect on past errors and look for a way forward. 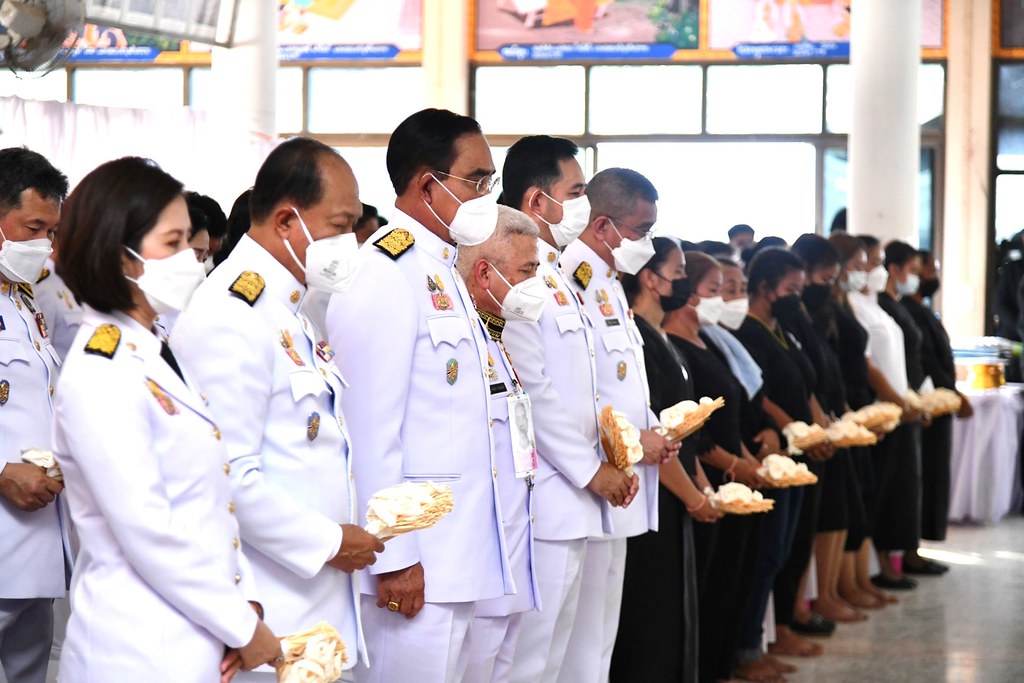 On 12 October, bodies of the dead were cremated in three separate Nong Bua Lamphu temples. Thai Post reports that the ceremonies were held under royal patronage with Prime Minister Gen Prayut Chan-o-cha acting as a representative.

Panya Kamrab, the perpetrator who shot himself along with his wife and her child, was cremated at a temple in neighbouring Udon Thani Province. Manager Online reported that his mother escorted his corpse to the crematorium.

Over the past week, the small Northeastern town continued to attract the country’s attention.  Relevant officials pursued their investigations and media representatives lingered at the scene, reporting from the field.

The police are still trying to understand what triggered Panya’s actions, having found no trace of drugs in his body. According to a BBC Thai report, Pol Gen Surachate Hakparn, the National Police Deputy Commander, believes that Panya was driven by stress due to staggering debts and his loss of employment.

Pol Gen Surachate ordered that all of the 180 witnesses to the slaughter be interrogated only once so that they do not have to repeatedly recall the trauma.

State authorities and media representatives were early targets for the blame. The morning after the incident, the entrance to the Child Development Centre, where 23 children and two teachers died, was decorated and covered with a red carpet in preparation for a wreath laying ceremony on behalf of Princess Sirivannavari. Deemed inappropriate, the carpet was removed before the Province’s Deputy Governor began the ceremony.

Because government ministers had yet to arrive on the scene, the victim’s families were also reportedly obliged to wait for a long time to get the bodies of their loved ones back from the morgue and receive relief money.

Such unnecessary measures in time-pressing circumstances were not the only disturbances. A CNN reporter and a cameraman were photographed climbing over a police cordon to film inside the day-care centre, attracting the fury of the public and local media. Many felt that taking footage inside the centre was not only insensitive and unethical but also amounted to tampering with the crime scene.

Condemnations were issued by the Foreign Correspondent Club of Thailand (FCCT) and the Thai Journalists Association (TJA), CNN replied that local staff allowed them to enter and that there were no police lines in place when they went in. Two reportedly filmed for 15 minutes and then left.

In a subsequent statement, CNN International's executive vice president and general manager Mike McCarthy insisted that the CNN reporters had asked for permission to enter, but “now understand that these officials were not authorised to grant this permission," adding that it was “never their intention to contravene any rules.”

He added that CNN had stopped broadcasting the report and pulled the video from its website. The CNN crew on the scene, award-winning journalist Anna Coren, and a cameraman Daniel Hodge, also met with Pol Gen Surachate and expressed their deepest apologies.

They were fined 5,000 baht each (about 133 US dollars) and asked to leave the country, when it was learned that they were working on tourist visas.

In an interview with Inside Thailand news on 10 October, Pol Gen Surachate revealed that the incident took place when the venue was being prepared for the wreath-laying ceremony.  At the time, the police cordon had been removed and the gate was opened. A number of other people were reportedly also allowed inside the facility during the hour-and-a-half long preparation period.

In addition to CNN, eight local media outlets came under scrutiny for “improper” coverage of the incident. On 11 October, the National Broadcasting and Telecommunications Commission (NBTC) issued a letter summoning Channel 3HD, Thairath TV, Amarin TV HD, Channel 8, Nation TV, WorkPoint, National Broadcasting Services of Thailand (NBT), and ONE Channel to discuss reportage containing interviews with the families of victims and the wounded, disturbing photos, and graphics simulating the massacre.

Relaying heartbreaking scenes of the incident, the media was blamed for its insensitivity in reporting disturbing news, rekindling a long-standing debate about how journalists should cover such tragedies.

In an interview with PPTV, Teeranai Charuvastra, the TJA vice president who oversees the association’s media reform and freedom of expression division, said that the media needs to take three things into account when reporting sensitive content: is the reportage of public benefit; will it cause harm; and can a possible backlash be managed.

“There is no concrete rule. Despite how we draft it, despite how stringent it appears, there is no clear rule. The media and its audience are the only ones who can answer,” said the TJA vice president.

On the same program, Sakulsri Srisaracam, an assistant professor of journalism from Chulalongkorn University, said that media coverage had improved since the mass shooting incident at Nakhon Ratchasima in February 2020 but that work was still needed on how sensitive issues that involve violence are reported.

Her hope is that the media can create content that questions the root cause of a tragedy, brings people out of sorrow and helps them to better address problems together in the future.

As a parting gift, the 24 children who died in the incident were each given a small costume made by a children’s clothing shop in Lampang Province.  The outfits were in line with the childrens’ dream careers that they talked of with their parents -  astronauts, nurses, pilots, soldiers, firefighters, doctors, and police officers.

Ranked as one of the world’s deadliest massacres of children, the incident shook the country, giving rise to concerns that steps should be taken to assure that it is never repeated.

On 12 October, Gen Prayut announced four measures to address what many believe are the root causes of the incident: a proliferation of drugs and guns, and a need for improved addict rehabilitation and mental health programs.

The measures include a crackdown on narcotics networks, lessening the number of drug possessions resulting in criminal prosecution and mandatory rehabilitation, tightening firearms licensing, revoking gun licences for known drug addicts, the mentally-ill and individuals deemed to be a threat to society, and cracking down the illegal gun market.

On a recent Thairath TV program, Yongyut Wongpiromsant, an advisor at the Mental Health Department, discussed the mental health problems of perpetrators. Citing research from other mass shooting incidents, he said that only about 5% of the killers had mental illnesses.  The rest were motivated by stress, alcohol, or personal disputes.

According to Yongyut, those with mental illnesses often suffered from untreated drug-addiction and severe delusional disorders. He added that treatment would greatly decrease the possibility of the violence behaviour and proposed that efforts be made to rehabilitate those who are addicted to drugs.

With respect to former employees in the security sector, he pointed out that removing such individuals from office alone did not address the problem and suggested that mental health treatment be imposed along with disciplinary measures to reduce the risk of violent ex-officers turning on society.

Another victim of the perpetrator was largely overlooked. Panya’s mother, alive and grieving, is preparing to leave her home to live with another of her offspring, to reduce stress and come to terms with the situation.

She was initially subject to public condemnation and anger.  It abated when the mental health department published her apologies for not attending the royal funeral ceremony.  She said she hoped to apologise to everyone personally when she became better.

Commenting in reply, people asked why a mother had to accept the blame for a crime she didn’t commit.

On his Facebook page, Decha Piyawatkul, a psychiatrist from Thai Nakarin Hospital, posted a critique of ‘injecting guilt’  into people not responsible for the wrongdoing, adding that apologies should be made instead by the National Police.

“Claiming [the killer] was no longer a police officer is hideous. He used to be an employee under your affiliation. He had problems all along and when you didn’t have any way to take care of him, you turned him out. That doesn’t mean that you can brush off responsibility.”

“You’re a public organisation with a public responsibility; you don’t have the rights to brush off the burden,” stated Decha.