A series of previously unpublished photographs of the 6 October 1976 Thammasat University massacre taken by Thai photographers working for newspapers at the time of the massacre is now on display in a new exhibition at the Kinjai Contemporary gallery. 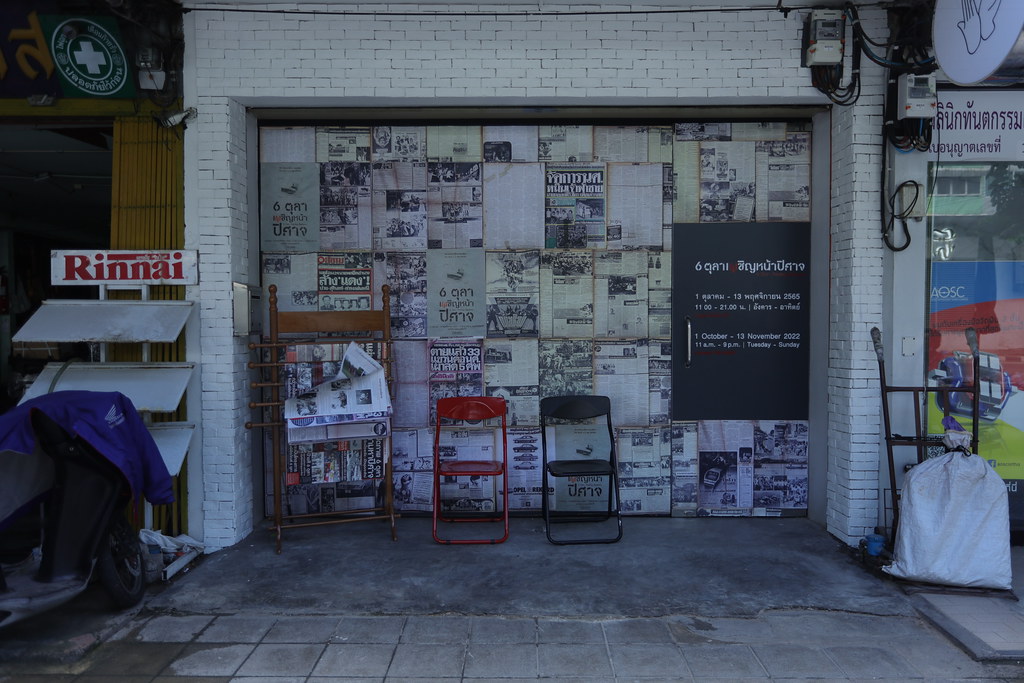 The photos come from 14 rolls of film given to the October 6 Museum Project by a group of Thai newspaper photographers, including former Siam Rath photographer Somboon Ketpueng and former Daily News crime photographer Preecha Karnsompoj, who later won the Isara Amantakul Award for the photograph of a man driving a stake into a dead body during the 1976 Massacre. 750 others were retrieved from the Thairath Newspaper Information Centre.

The exhibition uses all of Kinjai’s four-storey building and features the photos alongside information collected by the October 6 Museum Project, video interviews of the photographers, and witness testimonies, including that of a man who, as a child, saw bodies being burned near Sanam Luang during the massacre.

The devil is in the detail 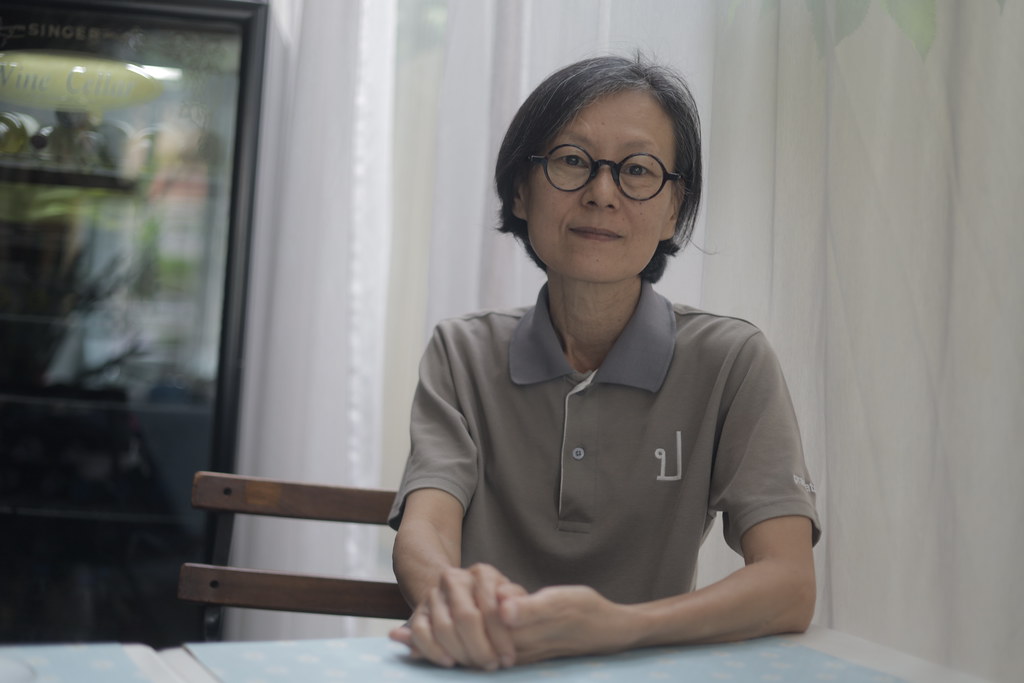 “If you ask me if there is anything new in these 14 rolls of film and whether they changed our original understanding, I’d say not so much, but they help show us the details,” said Supaporn Asadamongkoln from the October 6 Museum Project.

She explained that, although the photos do not reveal new information about the 6 October 1976 massacre, they reveal more details about the events of the day, from the expression on the faces of protesters, the police officers, and the people in the crowd to the weapons being used by the officers. These details, Supaporn said, were seen when the photos were projected onto a large screen, and may not have been seen from a 3-by-5 photo.

Supaporn said that it was difficult to choose which photos to feature in the exhibition, and that the research team’s choices were shaped by the design team, who asked them to pick a photo and give a reason why it was chosen, noting that the theme of the exhibition is “the devil is in the detail,” since the team felt they see more of what was going on in the photos once they are enlarged and projected onto a screen. 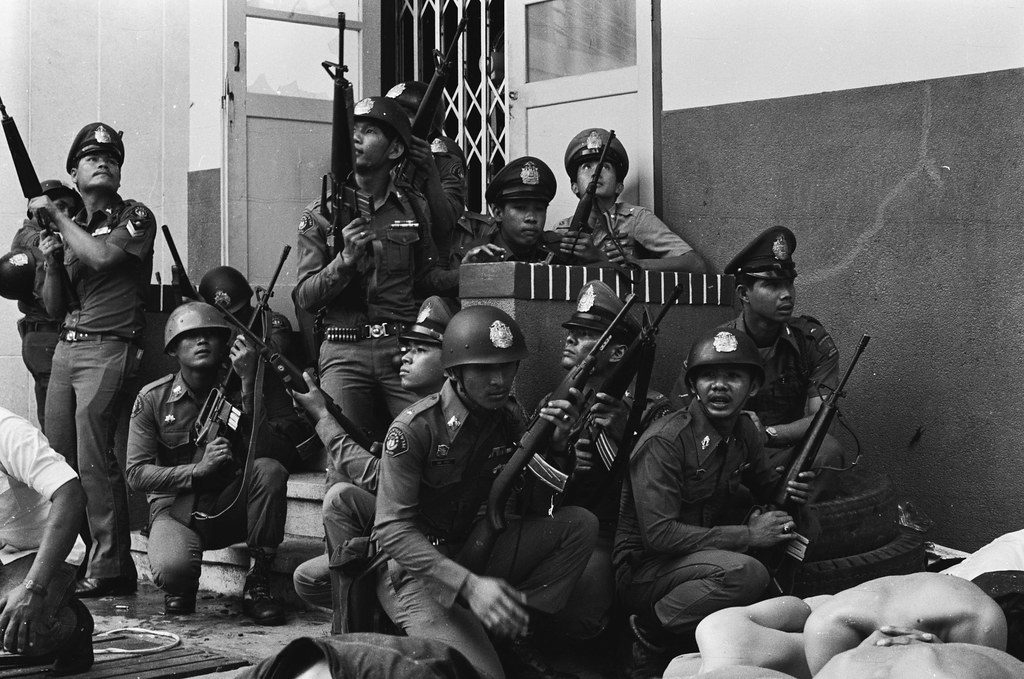 A photograph from 6 October 1976 shows a group of police officers with their weapons. (Photo from the October 6 Museum Project)

“When we say ‘the devil is in the detail,’ it means that we see the process of having to enlarge them to get to see the devils in there. If we just look at them normally, then we don’t see anything,” she said.

Most photos shown in the exhibition have not previously been published. On the evening of 6 October 1976, Adm Sangad Chaloryu led the National Administrative Reform Council (NARC) in a military coup overthrowing the civilian government led by Prime Minister Seni Pramoj. The NARC ordered all newspapers to stop publication on 7 – 8 October 1976, and any newspaper that wanted to resume printing on 9 October must ask for permission to do so. 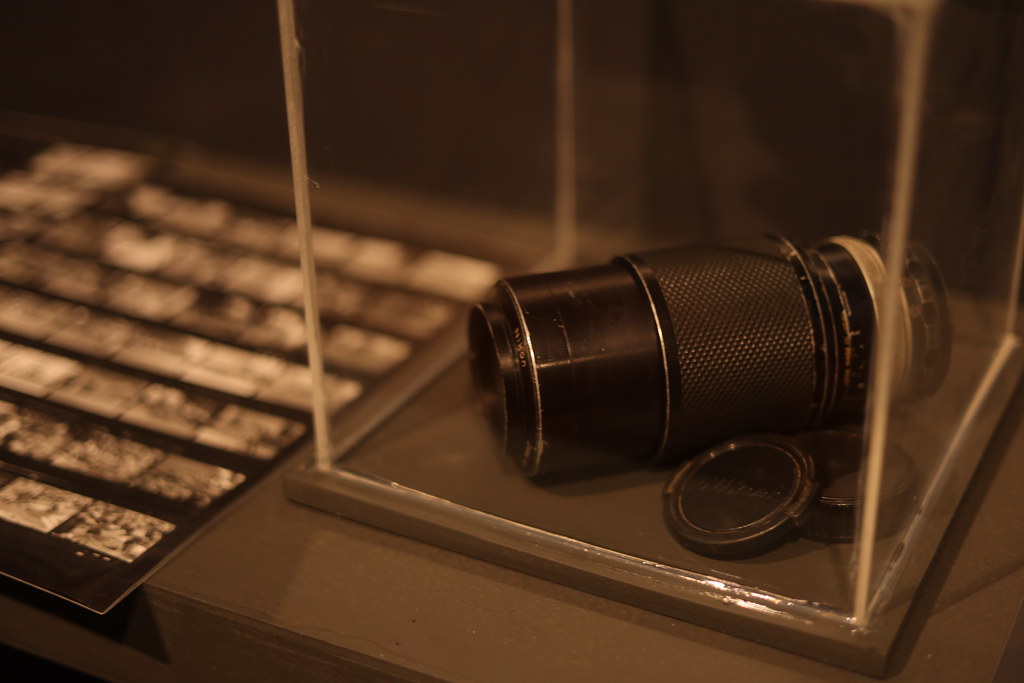 Supaporn said that newspapers published on 9 October 1976 reported on the 6 October 1976 coup, the appointment of Thanin Kraivichien as Prime Minister, orders issued by the NARC, and lists of people who had been arrested. Although some photos of the massacre were published, the political changes meant diminishing press freedom, and so most photos of the massacre remained unpublished.

One of the photos featured in the exhibition, however, has previously been published. A photo of a man driving a stake through the chest of a dead body lying on the street near Thammasat University won photographer Preecha Karnsompoj the Isara Amantakul Award in 1976, but Supaporn said it was almost not considered for the award. She said she was told by Preecha that one of the judges questioned whether the photo could be considered because of the repressive political climate at the time.

“This is one example that the lack of freedom of expression extended to journalists themselves who would self-censor that this can’t be done, that this photo does not belong. But he was insisted on submitting it, and the judges said it was an appropriate picture and granted it the award,” she said.

A search for stories 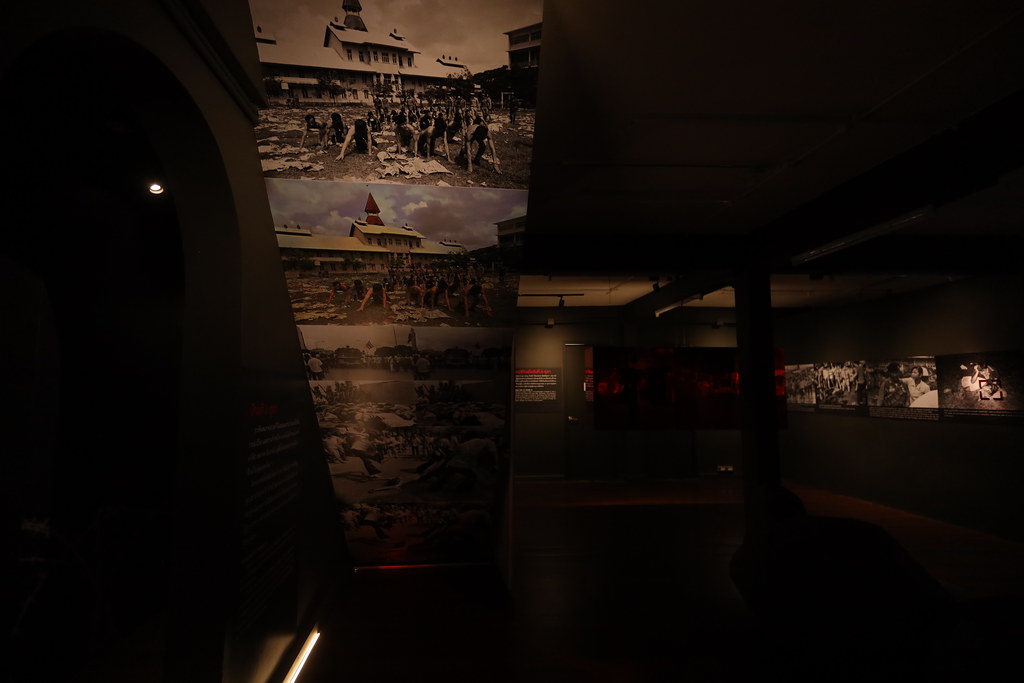 Included in the exhibition are colourised versions of some photos from the 6 October 1976 Massacre.

Other than the photos, the October 6 Museum Project is also searching for witnesses to the massacre from all sides. Supaporn noted that although she wanted to speak to police officers who took part in the crackdown, many declined to be interviewed as they may have moved up the ranks since 1976. Meanwhile, victims of the massacre may still be traumatized.

“It’s difficult to locate and talk to the police, even though information from the police, whether they are paratroops or whatever unit that was in the operation that day, I want to hear it. I want to ask them what happened, what orders did you receive,” Supaporn said, noting that no written order for the police operation on 6 October 1976 has ever been seen, and that a retired officer she spoke to said that he was just on duty at the time and heard orders from the radio. 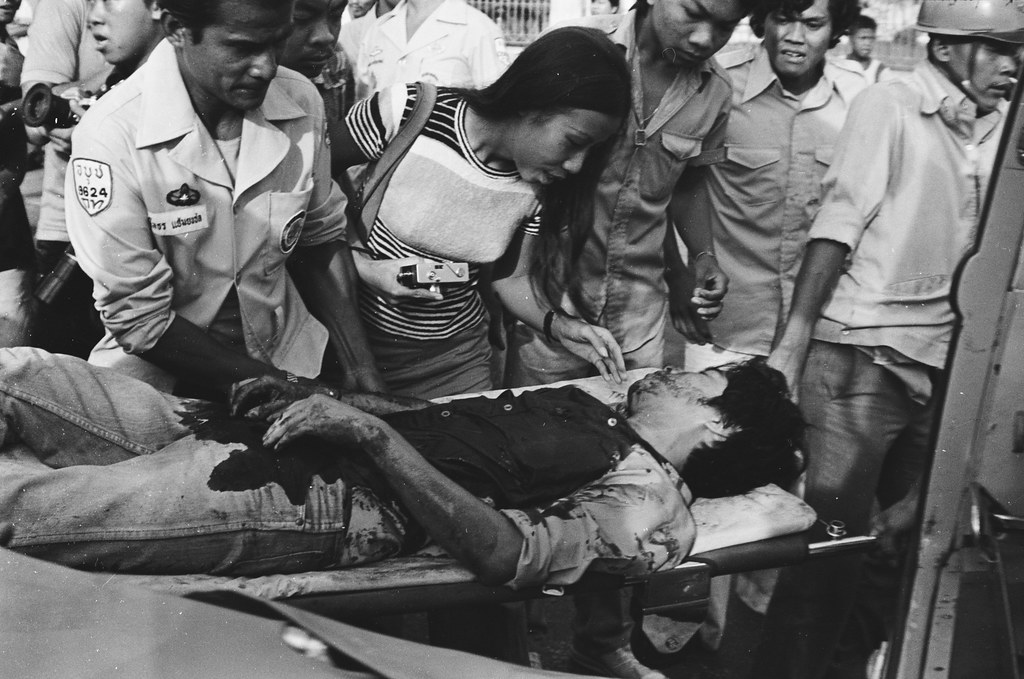 A photograph from 6 October 1976 shows a young woman holding a camera leaning over an injured man. Supaporn speculated that she is likely a journalist. (Photo from the October 6 Museum Project)

The October 6 Museum Project also released a set of photos on its Facebook page ahead of the exhibition as part of their search for the people in them, such as a boy wearing shorts walking out of a university building with his hands up and other children present during the day’s event, or a group of 7 young women who seem to be in detention waiting to be bailed out.

One photo shows a young woman holding a camera standing next to a paramedic and leaning over an injured man on a stretcher. Supaporn speculated that she is likely a journalist since she has a camera, and she also appears in several other photos showing that she was walking around the area, and was seen observing bodies being burned near Sanam Luang. Supaporn said she wanted to meet this woman, if she is still alive, and ask her what happened if she still remembers the day, and although this woman has yet to be found, Supaporn thinks the search for her is nearing the end.

Another photo shows a pair of young man and woman sitting asleep on the football field at Thammasat University during the night of 5 October 1976. Given their clothing, Supaporn speculated that they are not likely to be students, and although it is difficult to find out who they are, Supaporn said she wanted to meet them because this photo shows that it was not just students who were at Thammasat University during the massacre. 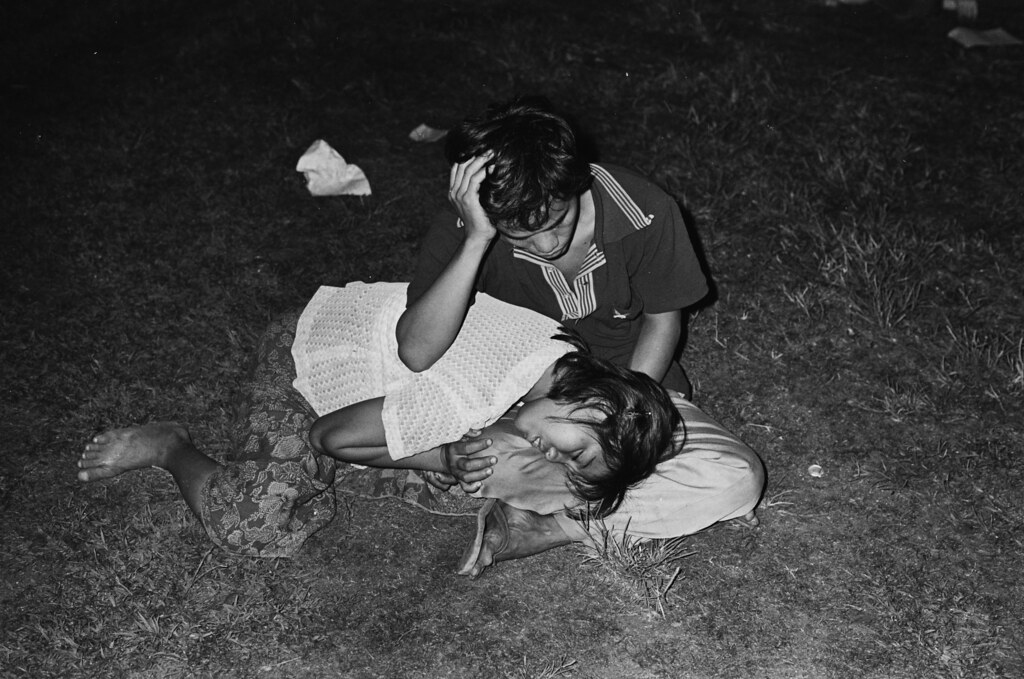 A pair of young man and woman asleep on the football field at Thammasat University on 5 October 1976. Supaporn believes that they are not likely to be students given the way they dressed. (Photo from the October 6 Museum Project)

Although most of the people whose photos were released ahead of the exhibition have not been found, others have. In a photo showing a nurse tending to a police paratroop officer’s injuries, her name badge is clearly seen. Supaporn said that the Project was able to find the nurse, who is now in her sixties and retired, and collect her testimony about the events of 6 October 1976, when she was on duty as part of a medical unit in an ambulance stationed near Sanam Luang. And while the officer being treated has since died, the Project was able to find another officer who also took part in the operation and testified as prosecution witness following the massacre.

“We think that history is fixed, but actually, it’s not. It depends on the evidence and things we receive, and we ask questions and discover things. New angles can appear all the time,” Supaporn said.

Supaporn said that the Project wanted to find witnesses to the massacre because their stories would help complete the picture of what happened. The 6 October 1976 massacre was a large event which involved thousands of people and included not only the authorities and the protesters but also bystanders and the crowd on Sanam Luang who came out of hatred against the students, incited to believe that the students were communists and therefore a threat. Stories do not come from just the students leaders, Supaporn said.

“If we hear from many sides and many perspectives, then we may see more of what we call the history of the 6 October massacre,” she said.

“We have not devalued the accounts or things that have been written. But because the incident was very large and is a conflict that has never been resolved what happened, whether the orders and who gave the orders, and the questions that remain in the hearts of all those who were at the incident, or even those who were not, the victims’ families, the many dimensions of what happened here, I think that from the photos, if anyone can tell us something more, it would help give the history of the 6 October massacre more dimensions.” 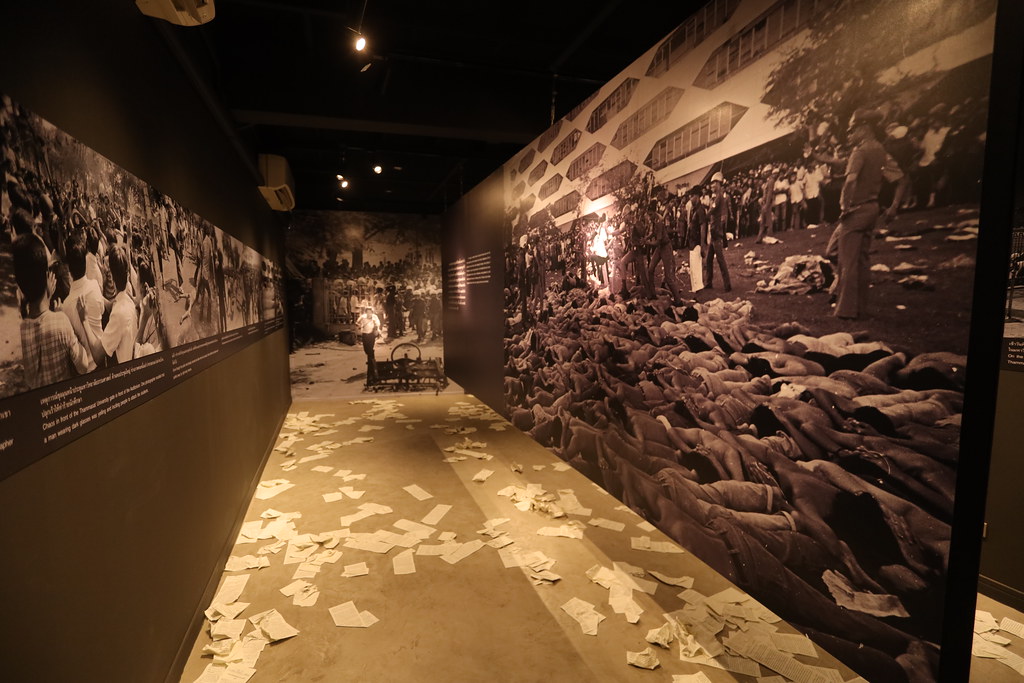 Photos are shown on the walls of Kinjai Contemporary.

The “October 6: Facing Demons” exhibition is now on display at the Kinjai Contemporary gallery on Ratchawithi Road, near the Sirindhorn MRT Station. It will run until 13 November 2022. The gallery is open Tuesday – Sunday from 11.00 – 21.00.

Panel discussions around popular movements and the 6 October 1976 Massacre will also take place every weekend in October at the gallery.