An art exhibition about enforced disappearance has been postponed indefinitely as the venue's owner said they were 'uncomfortable' after being contacted by the police. 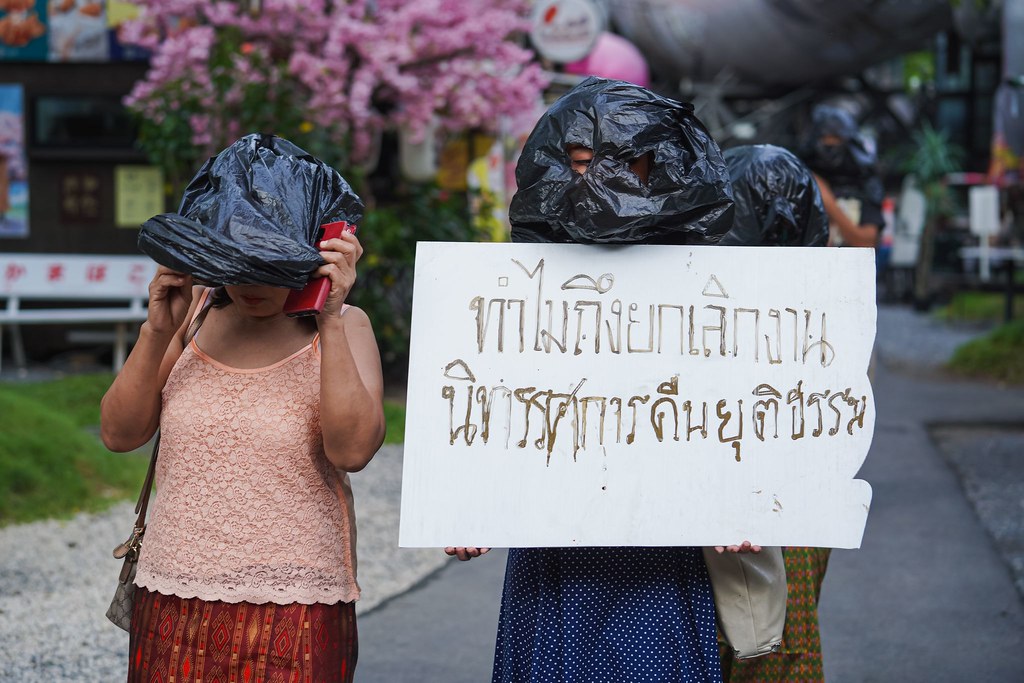 Activists holding a sign asking why the exhibition was postponed. (Photo by Ginger Cat)

The student activist group Mok Luang Rim Nam had planned an exhibition titled “Dawn of Justice” to raise awareness about enforced disappearance and human rights violations in Thailand. The exhibition, which the group said would be done as ‘immersive art’ and also feature panel discussions, workshops, and performances, was scheduled to take place between 20 – 25 September at the exhibition space and community mall Changchui.

Thai Lawyers for Human Rights (TLHR) reported yesterday (19 September) that the organisers were informed by Changchui that the venue’s management was contacted by the police, and that officers from Bangplad Police Station wanted to speak to the activists.

One of the organisers then contacted the Deputy Superintendent of Bangplad Police Station, and was told that it was normal for officers to talk to event organisers and that they were not harassing the group. When the activist asked if the police summoned everyone who has recently organized a concert at Changchui for a conversation, the Deputy Superintendent said that their question was rude and hung up. The group has not been able to contact him since.

Student activist Sopon Surariddhidhamrong, one of the exhibition organisers, said that there should have been no reason for the authorities to prevent an art exhibition from taking place. He also noted that the organisers booked the exhibition space far in advance and that no concerns were raised when they submitted the exhibition concept notes to the venue management. Although the management did ask them to be careful when talking about the monarchy, Sopon told them that the monarchy wouldn’t be mentioned as the event was an art exhibition, while he himself is prohibited from leaving his residence and from talking about the monarchy by his bail conditions.

Mint, a traditional Thai dancer-turned-activist who was also among the exhibition organisers, said that she wanted to demand an explanation from Changchui’s management, because saying that they are “uncomfortable” is not enough, noting that the organisers have prepared for months, had explained everything to the venue management in detail, and did everything that was agreed by both sides. It was therefore unfair to cancel at the last minute.

“I’m beyond expecting anything, because we did not prepare for a bomb to be dropped,” Mint said. “We were happy for the police to come to the exhibition, but this is not what that is. It’s cancelling us before the beginning of the event, and a day before we open, and what about all the preparation work we’ve done? I feel really bad that this happened.”

Sophon announced on Monday night (19 September) that they are no longer able to hold the exhibition at the original venue, but that it is not cancelled, merely postponed until they can find another venue.

He wrote on his Facebook page that the Dawn of Justice exhibition Is intended to restore justice to those whose rights have been violated and restore truth to the society, and that the organisers did nothing illegal and did not harass anyone.

“What happened reflects how our society is dominated by fear,” Sopon wrote. “They are afraid of even art, even speaking the truth. If we don’t stand up and fix it or change it, we may have to keep living in fear.”