The Cambodian authorities have failed to seriously investigate the enforced disappearance of the prominent Thai activist Wanchalearm Satsaksit in Phnom Penh one year ago, Human Rights Watch said today (4 June). During this time, Thailand’s government has done little to contribute to the investigation or press for progress. 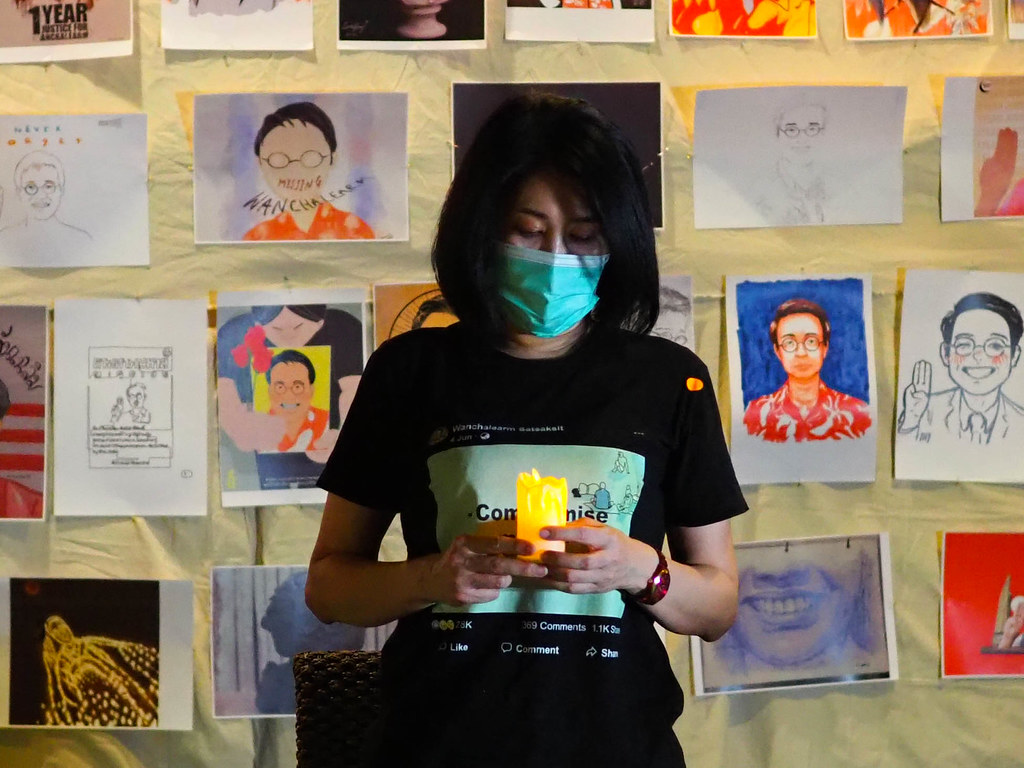 Wanchalearm, a 37-year-old pro-democracy activist, fled to Cambodia after the May 2014 military coup in Thailand. At about 4:45 p.m. on June 4, 2020, unidentified armed men abducted him in front of the Mekong Gardens condominium, where he resided in Phnom Penh. Multiple witnesses saw several men force him into a dark Toyota Highlander with the Cambodian license plate 2X2307, which then sped off.

“After one year, the Cambodian and Thai governments’ failure to locate Wanchalearm is glaring,” said Brad Adams, Asia director at Human Rights Watch. “The authorities in both countries appear to be deliberately slow-walking their investigation despite the abduction occurring in broad daylight before multiple witnesses. This charade raises concerns about their own role in Wanchalearm’s disappearance.”

The condominium’s security cameras recorded the latter parts of the abduction. CCTV footage obtained by the Thai online news agency Prachatai shows a dark SUV speeding away. Witnesses told journalists that the assailants hit Wanchalearm and then forced him into the Toyota Highlander while he repeatedly screamed “Please help!” in Khmer.

Sitanun Satsaksit, Wanchalearm’s sister, was talking to him on the phone at the time of the abduction. She told Human Rights Watch she heard him scream “I can’t breathe” repeatedly before the call was abruptly cut off.

Wanchalearm’s sister and her Thai lawyers provided over 177 pages of documents and testimony to a Cambodian court during a hearing in December 2020. Nevertheless, the Cambodian authorities to the present have repeatedly told his family, foreign diplomats, and United Nations agencies that nothing has been found. They have provided no information on Wanchalearm’s whereabouts, fate, or who was responsible for his abduction. Even when it was revealed that Wanchalearm had a Cambodian passport in the name of “Sok Heng,” the authorities failed to seriously investigate.

In June 2013, Cambodia ratified the International Convention for the Protection of All Persons from Enforced Disappearance, which defines an enforced disappearance as the arrest or detention of a person by state officials or their agents followed by a refusal to acknowledge the deprivation of liberty, or to reveal the person’s fate or whereabouts. Because they are outside of the protection of the law, a person who has been forcibly disappeared is at heightened risk of torture and extrajudicial execution.

The convention obligates governments to investigate allegations that a person was forcibly disappeared, even in the absence of a formal complaint. The authorities are also required to take appropriate measures to protect relatives from any ill-treatment, intimidation, or sanction as a result of the search for information about a “disappeared” person.

Repeated promises by the Thai government to resolve Wanchalearm’s enforced disappearance ring hollow, Human Rights Watch said. The Thai authorities have not energetically investigated the case, declining to give his family any information or to send investigators to Cambodia to conduct a formal inquiry. No concrete results have been made since the Attorney General Office and the Justice Ministry’s Department of Investigation said in July 2020 that they would investigate what happened to Wanchalearm.

On June 2, 2021, Prachatai reported that Charnchai Chalanonniwat, deputy director-general of the Attorney General Office’s Department of Criminal Litigation, would not even concede to Wanchalearm’s sister that the abduction had actually occurred, claiming that the Thai authorities had to wait for the result of a Cambodian court investigation that has dragged on interminably.

Since the May 2014 coup, Thai authorities have aggressively pursued the apprehension of pro-democracy activists who sought refuge in neighboring countries. The Thai government has repeatedly demanded that Laos, Vietnam, and Cambodia hand over those exiled Thai activists. At least eight of them have become victims of enforced disappearance. Thailand has never ratified the Convention against Enforced Disappearance or made enforced disappearance a criminal offense under Thai law.

Over the past seven years, Cambodia and Thailand have closely collaborated to harass, arbitrarily arrest, and forcibly return exiled dissidents in violation of international law. This collaboration has included people formally registered as persons of concern by the United Nations refugee agency. Wanchalearm previously told Human Rights Watch that he had occasionally been put under surveillance by Thai officials in Cambodia.