Friedrich Hegel, the German philosopher, once said “the only thing we learn from history is that we learn nothing from history”. With regard to Thai political history, I cannot deny that this quotation expresses one of the “all-time” brutal truths. It is clearly true that most Thai people have never learned any political lessons in Thai history. They have not only made no democratic progress but have also strengthened the authoritarian rhetoric peace-making to repeatedly disrupt democracy by undertaking a series of coups.

It has been 5 years since the 12th Thai coup in 2014. The junta broke its promises to hold a general election several times since the first promise made in 2014 . Forced by internal pressure to “hand over” power in some form to people, the junta finally allowed the first general election in 8 years, under the new constitution, on 24 March 2019. Comparing point-by-point the periods before and after the general elections of 1969 and in 2019, I have a compelling sense of déjà vu. 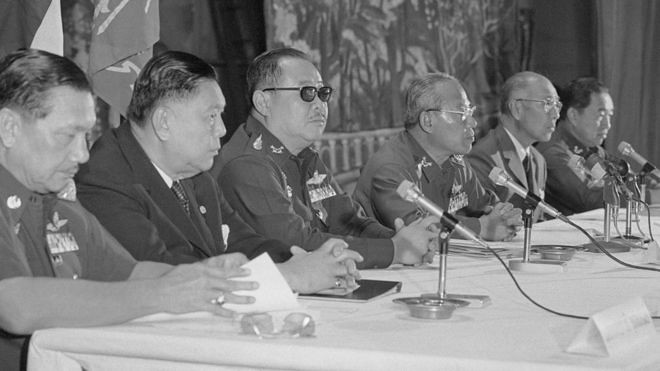 After the death in 1963 of Prime Minister General Sarit Thanarat, leader of the 1957 coup, General Thanom Kittikachorn became the new Prime Minister. Thanom enjoyed unlimited power under Article 17 of the constitution, which permitted him to ignore parliament and take any action he liked for 5 years. However, Thailand came under international pressure to hold a general election. At the time, the region was confronting the communist threat from the war in Indochina. The United States had placed military bases and facilities in Thailand and had taken Thailand as its closest ally in Southeast Asia in the regional fight against the communist threat. The United States also provided Thailand with economic support to impede the establishment of a Communist Party in Thailand and to develop Thailand’s infrastructure. Thanom was finally forced to hold a general election in 1969, the first in 12 years. But this election was one of the least democratic as the political institutions had been weakened by laws which had for 12 years restricted political activities and limited freedom of expression. In addition, many veteran politicians had defected to the United Thai People’s Party, headed by Thanom. Thanom won the election and formed a coalition government. Due to his lack of skill in dealing with politicians and his incompatibility with a parliamentary system, Thanom reinstated his unlimited power by undertaking a self-coup in 1971. 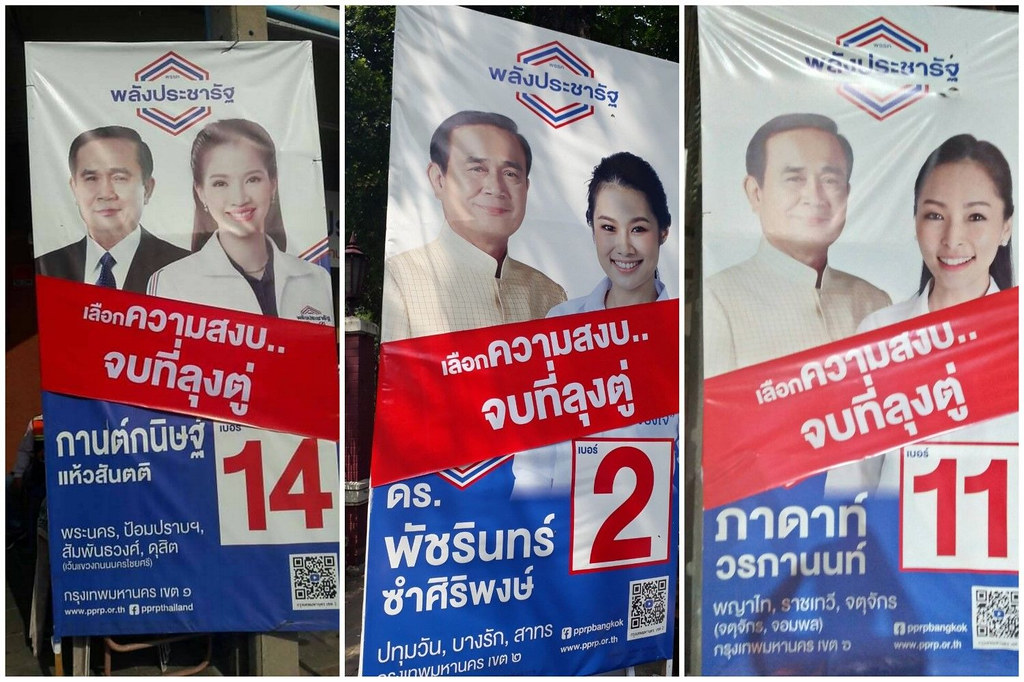 In the 2019 general election, social polarization between pro-junta and pro-democracy camps returned  after several decades and there seems to be no middle ground. The pro-junta party, Palang Pracharat, was formed specifically to contest the 2019 election in order to support General Prayut Chan-o-cha as candidate for Prime Minister. This party is not new but rebranded. Many veteran politicians and influential political factions, mostly based in the suburbs and upper central region, defected from their former parties, both Pheu Thai and Democrat, to join the Palang Pracharat party. The Palang Pracharat party deliberately planned to appeal to all groups of voters. They planned to win “foreseeable seats” from voters who may vote for certain politicians regardless of party. They also campaigned with the most effective dictatorial rhetoric, “Lueak khwam sangop chop ti Lung Tu” (choose peace, end up with Uncle Tu (Prayut)) to target another group of voters who would rather vote for party. Although the party did not in the end win a majority of seats in the parliament – according to the unofficial results announced by the Election Commission (EC) on 29 March 2019 – , it was not bad to come second with 118 out of 350 seats in the lower house. However, they still have a long way to go to overcome the obstacles facing them, because although the 250 “hand-picked” senators, whose votes will count in choosing the Prime Minister, are under Prayut’s thumb, the more than 245 opposition seats in the lower house are likely to destabilise the ability of the next coalition government to pass the annual budget, or to win any vote of no confidence.

The incumbent and prospective prime ministers in both the 1969 and 2019 elections, Prayut and Thanom, are both from the military. Although Thanom did not lead a coup like Prayut, he was very close to Sarit Thanarat who staged coups in 1947 and 1957. Prayut and Thanom exercised absolute power without a constitution or elected parliament for 5 years. They both wanted to extend their premiership through elections. Both created an ersatz political party – the United Thai People’s Party was formed in 1968 and Palang Pracharat in 2018 –and attempted to rule out any possibility of the opposition winning the election. Before the 1969 election, Thanom promised to provide many veteran politicians with “huge interests” – according to the cremation book of General Kris Sivara, Minister of Industry appointed by Thanom – if they decided to join his party. This was imitated by Palang Pracharat, even though there is currently no clear evidence of any quid pro quo. During Thanom's premiership, he had absolute authority under Section 17 of the constitution of the time. Prayut similarly has Section 44, a copy of Section 17. The gaps since the previous general elections are similar – about 12 years in 1969 and about 8 years in 2019. Essentially, a political discourse – the military juntas are a group of loyalists and protectors to the nation-religious-monarch – is used as a dictatorial tool to stabilize the juntas itself, which Thanom and Prayut use during their premiership.  However, in Thai political history, military juntas have never been successful in forming political parties under the rules of democracy. Thanom also was unable to deal with the political games played by veteran politicians who he brought into his party, and within 2 years, reproduced the “vicious cycle” by staging a coup against himself and leading country back to authoritarian rule. In additions, considering to Thai political polarization phenomenon, it is always between pro-junta and anti-junta camps. Before and after 1969 general election, Thanom defined a group of “leftist” as a national threat used as a discourse at the time to legitimize his role. It has rooted “social resentment” leading to Thammasat University massacre on 6 October 1976. In 2019 general election, the Thai polarized society between pro-junta and anti-junta camps returned. General Apirat Kongsompong – the current Commander in Chief of the Royal Thai Army and Prayut’s close ally – has recently referred to the song “Scum of the Earth”, which was labelled as a military propaganda before the 6 October massacre, during his interview on February 2019. It was surprising that the military junta’s propaganda of the last 5 decades can be revoked to stir up a feeling of resentment in the current Thai society.

Although both Prayut or Thanom desperately aspired to prolong their privilege, with regard to what Prayut has done, I am more worried than what Thanom did. Prayut has not only restated the nationalist ideology – nation-religious-monarch – initiated since the reign of King Rama VI but also revitalize the idea of “Thai Democracy” – firstly introduced by Sarit. Both can deepen the social polarization which will develop to the “strong resentment” between pro-junta and anti-junta camps. As he would like to use “long-lasting discourse” – conflict and disorder – to keep extending his power, his strategies may attempt to deepen fragmented society. Besides, he has adapted a hybrid strategy balancing dictatorial authority and legislative power. The current constitution was drafted by a committee appointed by the National Council for Peace and Order (NCPO). The EC and other independent institutions were also appointed by the NCPO-appointed National Legislative Assembly. Therefore, it is very interesting to watch the next move of the pro-junta parties’ attempts to form a coalition government, the announcement of the official election results on 9 May 2019 by the EC and the Constitutional Court decision on the party-list calculation. In addition, petitions for party dissolution may be submitted to the Constitutional Court at any time. Recently, members of the New Economics Party headed by Mingkwan Sangsuwan, former Minister of Commerce in the Samak government and former Pheu Thai member, decided to submit a petition to disband their own party. They claimed that the party could not be run by its executive committee because of interference from a third party, whose identity has not been clearly explained. Therefore, I would like to ask everyone to keep their eyes open and then you will see whether the political history will repeat itself or not.

Thareerat Laohabut holds a Bachelor Degree in Political Science with Honours from Thammasat University and spent one year on an Erasmus exchange programme at the University of Munich (LMU) from 2016 to 2017. Her academic focuses are Thai politics, Thai foreign policy, European Union affairs and global politics.