Environmentalists have called on the authorities to rethink changing Thailand’s environmental protection law, because the process lacks public oversight.

On 24 July 2017, representatives of the People’s Network for Sustainable Development led by Save Andaman from Coal submitted a petition to the Ministry of Natural Resources and Environment about the proposed Enhancement and Conservation of the National Environmental Quality Bill, which has been drafted to replace the 1992 version currently in use.

According to the group, the Bill has many legal loopholes and was drafted without genuine public participation, which is a violation of Article 77 of the 2017 Constitution.

Echoing a previous NCPO Head Order, the new bill cuts short the Environmental Impact Assessment (EIA) process, making it possible for state agencies to expedite public bids to find subcontractors for mega state projects even before the EIA is complete.

Article 50 of the bill also makes it possible for the authorities to skip the EIA process for projects located in close proximity to similar projects that have already passed an assessment, the network added.

“This bill is secondary in importance to the Constitution. However, the process of listening was conducted without care, which will have wide impacts…also it has implications that might benefit large [state] projects,” reads part of the statement from the group.

The statement accepted that the Ministry held a forum about the bill on 17 July and opened an online survey on the Ministry’s website to collect feedback. However, the bill was already completely drafted before people were allowed to express their opinions.

The network states that instead of making the EIA compulsory, the bill should implement a more holistic and inclusive process conducted independently, such as a Strategic Environmental Assessment.

The group vowed to escalate opposition to the amendment process.

Earlier, on 23 July, a gathering by the People’s Network was prohibited by police on grounds that it violated the Public Assembly Act and the ban on political gatherings of five or more persons.

Subsequently the group resorted to sending their representatives to submit the petition. 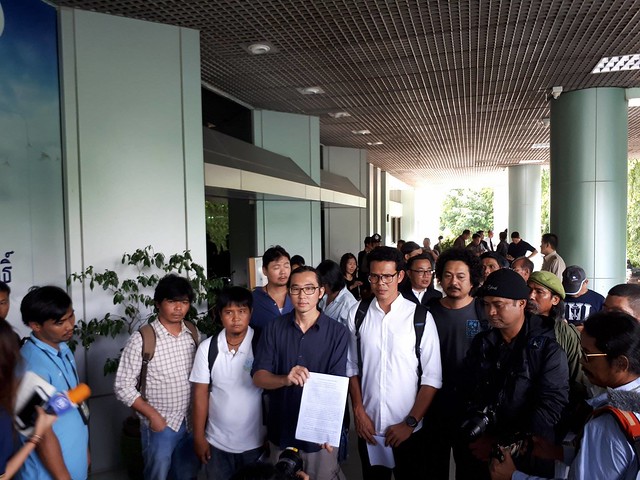