A Key PULO member talks about his 18 years behind bars, during which he helped to further peace talks.

Haji Sama-ae Thanam, former leader of the Patani United Liberation Organization (PULO), a leading insurgent movement, speaks to Prachatai about his 18 years in prison in 4 different facilities until his release on this year’s Hari Raya (Eid al-Fitr). During his time behind bars he helped to further peace talks in the Deep South. Here, he talks about the prospects of peace for his homeland.

Ma-ae Sa-a, also known as Haji Sama-ae Thanam, ex-leader of the PULO insurgent movement, was sentenced to life for treason. His sentence was progressively reduced until he was allowed parole, and later granted a conditional release on 17 July, on Eid al-Fitr.

During his 18 years of imprisonment, Sama-ae has been keeping up with events in the Deep South. His role in peace talks, both those organized by the Thai government and those by PULO, show that he has been trying to push for both sides to talk with each other.

Haji talks about his role in peace talks and his views on achieving peace in the Deep South. Thaweeporn Kummetha, Hussan Tohdon, and Muhammad Dueramae visited his home in Tha Nam Village, Tha Nam Subdistrict, Panare District, Pattani province. He had arrived home only 4 days before.

This interview was conducted in Malayu. The interviewers hope that through the use of local language, the interview will distinguish itself from other media that gather information through Central Thai. 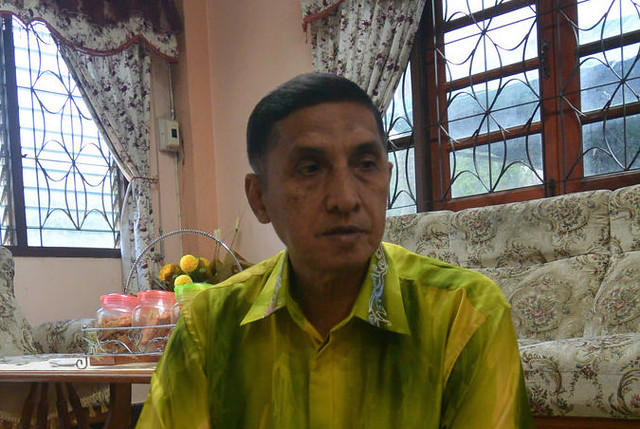 Haji Sama-ae Thanam tells us that he was arrested in 1997, and in 1998 was sentenced to life. During his 18 years in prison, he was incarcerated in a total of 4 prisons: Bangkok Remand Prison, Bang Kwang Central Prison, Songkhla Central Prison, and finally Yala Central Prison before being paroled and released.

“During my time in prison, I had a clean record. I never hurt anyone, so the wardens respected me. I also helped other inmates, especially those who hadn’t adjusted to prison life yet. I helped others who were sick, without caring about their religion or ethnicity. I read them the Du’a [in Islam, a prayer to call upon God] like a provincial Muslim doctor.

During my entire time in the prisons, I was treated well by the wardens. I was never hurt or tortured.

“I wept when my lawyer, Somchai, was forcibly disappeared”

During my trial, Somchai Neelapaijit, former president of the Muslim Lawyers Association, came to represent me in court, along with lawyers Godae Gotae and Kamolsak Liwamoh.

I respected and admired Somchai very much, since he was a sincere person who sacrificed himself for others. It’s very hard to find a lawyer like him.

The last time I saw lawyer Somchai was at the Bang Kwang Central Prison. He said to me that he would help me as long as he lived, and would never abandon me. Not long after that I heard about his enforced disappearance, and I was extremely distraught and sad.

Normally, I don’t even cry when someone I know dies. But Somchai’s enforced disappearance made me weep.

During the period of unrest in the Deep South, I wrote a letter to Pol Lt Col Thaksin Shinawatra, the Prime Minister at the time, suggesting solutions to the violence through peace talks.

I presented the letter through Gen Thammarak Isarangkura na Ayudhaya the defence minister at the time. Only a month later, I received news that the letter had reached the hands of the prime minister, and I got a response as well.

The reason I sent a letter to the PM was because I once was a coordinator for peace talks between government representatives and Tongubiro Gotolilor, the former secretary general of PULO from 1991 to 1993. At that time, Lt Gen Kitti Ratanachaya was commander of the 4th Army Region.

The government representatives at that time included Gen Akanit Maunsawad and Maj Gen Charin Amornkeaw. The first time they met to talk was in Egypt, and the second time was in Syria.

“All conflicts end with negotiations”

Peace talks were arranged because PULO views it as an internationally accepted way to resolve conflict. Conflicts all over the world end with negotiations and discussions at the tables of peace talks.

After Pol Lt Col Thaksin Shinawatra received my letter, he immediately tried to arrange peace talks. He sent contacts to Malaysia to get in touch with Wan Kadir Che Man, former president of the Bersatu Group, an organization that fights for the liberation of Patani. However, Wan Kadir’s group declined.

They refused because they were not ready to discuss peace talks. They didn’t trust Thai government to be sincere in their intentions. At that time, the group was also afraid that if they came out to talk with Thai government representatives, they could be arrested like I was. Even I, who used to be a coordinator and middleman, was arrested.

Later, during Gen Surayud Chulanont’s office as PM, further peace talks started, sponsored by Mahathir Mohamad, former PM of Malaysia. However, none of these peace talks were successful.

When Yingluck Shinawatra was PM, there were the first open peace talks, but they still weren’t successful.

When Gen Prayut Chan-o-cha took over, he sent an official to me to ask for my input in achieving peace. They asked me who would be a suitable representative from the Thai side.

I replied that it had to be someone whom the PM trusted the most, whether it be a military officer, police officer, a civilian, or anyone else. He had to trust that person to resolve any problems that arose in a peace talk.

Personally I think that the process towards peace needs to place importance in the “inner people.” By that, I mean the people living in Patani. We have to ask them what they need, and how they want to achieve it. The process towards achieving peace cannot just end at the peace talks discussion table.

Presently, the Council of Syura [Malay: Majlis Syura Patani, an umbrella organization of Deep South insurgent groups] has been established. However, the Syura still needs to listen to the voice of the “inner people.”

The Council of Syura is different from MARA Patani [Malay: Majlis Amanah Rakyat Patani, another umbrella organization of Deep South insurgent groups]. Many people do not accept the actions of MARA. In addition, the name MARA is the same as many other organizations from Malaysia, so there are a lot of misunderstandings about MARA being a Malaysian organization.

How should the peace talks proceed in order to make progress?

If the peace talks in Patani are to progress, then the Council of Syura must be able to convene at least 3 to 4 different groups to talk. Every group must be invited to the discussion, since each group has their own needs.

It’s not counted as a failure either, if unity is not achieved. It could be counted as an “incomplete success.” It’s like having finished building a house, but some people are still chiselling. The house is liveable but they have to endure the noise of hammering.

What do the peace talks really need?

Let me refer to a topic that was brought up in the 8 June 2015 peace talks. As far as I know, the Thai authorities had one proposal, while the Council of Syura had three.

The Thai authorities proposed a ceasefire during Ramadan, which produced favourable results, even if it was an unofficial request. This year’s Ramadan was one of the most peaceful so far, especially when we compare it to the last two. This shows that this year’s peace talks are more effective that the ones in 2013.

The only way to solve the protracted conflict in this area is to hold open discussions about it. The discussions should follow His Majesty the King’s royal initiatives of understanding, accessing, and developing the people. Development is especially important, because citizens living in developed areas around the world have a good standard of living, good jobs, and good education. Those areas do not foster conflicts.